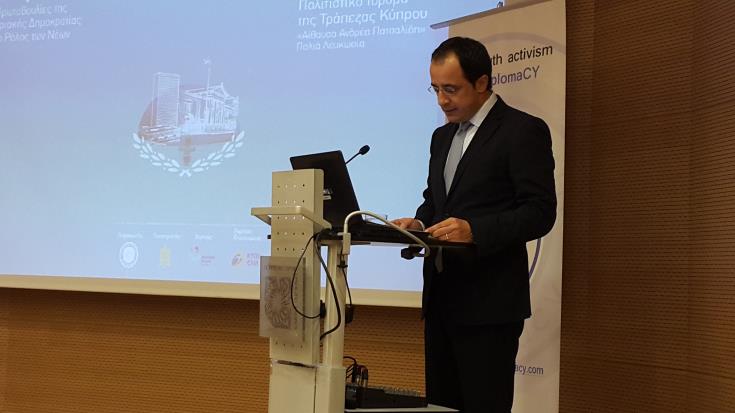 Foreign Minister Nicos Christodoulides has analysed the three main pillars of the priorities of Cyprus’ foreign policy which are set to contribute to efforts towards a Cyprus solution, the top priority of the Republic of Cyprus.

Speaking during the annual meeting of the heads of Diplomatic Missions of Cyprus abroad, Christodoulides referred to those pillars that should be promoted by the Ministry of Foreign Affairs.

As he pointed out, the main pillars of the Republic’s foreign police relate to the development of bilateral and multilateral relations with the Middle East and the Gulf countries, the active and effective participation in European affairs and the development of alliances within the EU, and the enhancement of relations and the expansion of issues discussed with the five Permanent Members of the UN Security Council.

As regards the first pillar, namely relations with the countries of the Middle East and the Gulf, Christodoulides stressed that it is important to plan the next steps and actions in order to strengthen and even expand those relations on a multilateral as well as bilateral level.

Regarding the second pillar that concerns the effective participation of Cyprus in European affairs and the development of alliances within the Union, Christodoulides said that there are some EU states with common concerns which enables the adoption of joint action, such as the cooperation with the seven states of the Mediterranean Sea.

With regard to this cooperation, he said, more concrete work is necessary, adding that one might also consider cooperation with a smaller group of Mediterranean states.

As regards the third pillar, that is the relations with the Five Permanent states of the UN Security Council, the Minister said that it is important to expand the agenda beyond the Cyprus problem to include other issues as well.

Finally, Christodoulides said that the promotion of these three pillars of the foreign policy will inevitably enhance the efforts of the Republic of Cyprus to solve the Cyprus problem.

Cyprus remains divided since the 1974 Turkish invasion of the island. Numerous UN-backed talks, aiming at reunifying the island under a federal roof, have failed to yield any results. The latest round of peace talks that took place in July last at the Swiss resort of Crans-Montana ended inconclusively.

By In Cyprus
Previous articleLua reunited with owners, efforts continue to help other pets (video)
Next articleNetflix teases ‘fitting end’ to defining series ‘House of Cards’