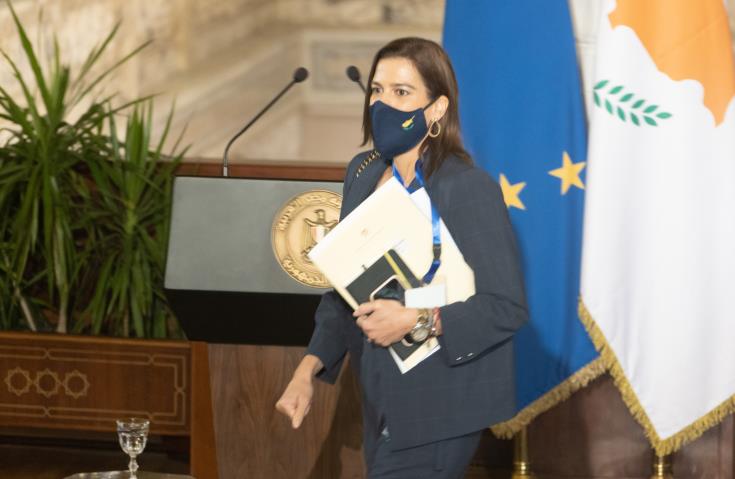 The technical committee that is working on the preparations for a joint gas pipeline project between Cyprus and Egypt will convene on 15th September, according to a statement released on Sunday by the office of the Minister of Energy, Commerce and Industry, Natasa Pelides. The minister said she was very satisfied with her meetings in the Egyptian capital on Saturday.

The Energy Ministers of Cyprus and Egypt also decided on Saturday to sign a Memorandum of Understanding for the electricity interconnection between the two countries in the coming months. A business mission will also travel from Cyprus to Egypt to increase the trade of goods and services.

Discussions between Pelides and Egyptian Petroleum and Mineral Resources Minister Tariq Al-Mulla as well as Nevin Gamea, Minister of Industry and Trade of the Arab Republic of Egypt in the framework of the first Intergovernmental Meeting were “very constructive and totally productive”, the  press release said.

“The Minister is very satisfied with the decisions taken to promote a series of important policies between the two countries and expressed certainty that in the next months many of these issues will make progress”, it added.

Regarding energy, the ministers called for speeding up the deliberations of the joint committee which has been instructed to implement the intergovernmental agreement for the construction of a direct marine pipeline to transfer natural gas from the offshore Aphrodite gas field in Cyprus to liquefaction plants (which convert gas into a liquid state) in Egypt.

Within this framework, a meeting of the relevant technical committees will convene in Cairo on 15 September and examine the various scenarios regarding the capacity, technical specifications, and economic aspects of the pipeline.

Both Egypt and Cyprus expressed their commitment to further promote the international organisation «East Mediterranean Gas Forum» (EMGF), where the two countries participate as founding members. The hard work that has taken place in the first year since it was set up, has led to the participation of eight countries and three more as observers including the US and the EU.

Cyprus has assured that when it undertakes the presidency of the EMGF from 1st January 2022, it will work in coordination with the Egyptian side to implement the common goals for the efficient use of the energy resources of member states as well transition to green energy, the statement added.

One of the most important decisions of yesterday’s contacts in Cairo, the statement said, was the memorandum of understanding that will be signed in the next months for the electricity interconnection between the two countries. Pelides has invited her counterpart to pay an official visit to Cyprus to sign the memorandum. The trilateral memorandum of Understanding between Cyprus, Egypt and Greece will then be planned, to promote the electricity interconnection of the three countries through the «EuroAfrica Interconnector» project.

Moreover, based on the Cyprus-Egypt in the Field of Electricity and Renewable Energy Sources, it was agreed to exchange know-how in these sectors, especially on the use of solar thermal and photovoltaic systems, as well as green hydrogen production.
In the field of trade, it was agreed to set up at regular intervals business forums to strengthen bonds between the two chambers of commerce. The aim, said Pelides, is to increase trade in services and goods, especially pharmaceuticals and aquaculture products. In the first stage, a business meeting will be held in Cairo in the next few months with Cypriot and Egyptian business people in areas of common interest.