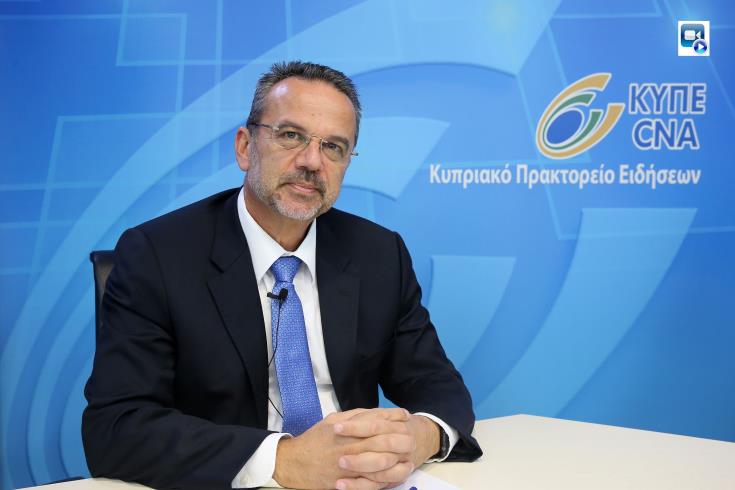 Cyprus has the human resources and has set up the appropriate structures to recover lost ground in research and innovation, Chief Scientist for Research and Innovation Kyriakos Kokkinos said in an interview with Cyprus News Agency.

“So we have to go some distance. Saying that, it does not mean that this distance cannot be covered with the right actions and policies, “he said.

He added that Cyprus had the human resources to recover lost ground and plans to achieve that through the institution of the Chief Scientist and the creation of other structures such as the National Research and Innovation Council and the Deputy Ministry of Innovation,  Research and Digital Policy, that the government plans to set up within the next three months.
He also said that the ecosystem of Cyprus was not only about 1,200 professional researchers or companies in Cyprus, but also included Cypriot scientist abroad.

“Our diaspora is our best ambassador and we need to find the mechanisms to mobilize it” he said, adding that this did not necessarily meant repatriation, although huge job opportunities are being created in Cyprus for professional researchers as the ecosystem expands.

“For me what is important is to exploit these people through synergies while working abroad. We also want the Cypriot scientists` synergies and cooperation with the diaspora, “he said.

Regarding the creation of a Deputy Ministry for Digital Policy, Research & Innovation, he said that it would be a great addition to strengthen the country`s knowledge society and competitiveness.

As Kokkinos said, for each of the above chapters there are specific indexes and are monitored on a quarterly basis, while Chief Scientist and the National Research and Innovation Council report directly to the President of the Republic of Cyprus.

At the same time, Kokkinos referred to competitive funding programs for companies of $ 18 million announced last June, saying that there was great interest.  As he said, this is the first time that the business community understands the importance of investing in research and was seeking both state aid and assistance.

Cyprus, he said, is a European country, and it also has access to Israel`s highly competitive market and the Middle East which is very innovative in specific areas, as well as North Africa.

Cyprus, he added, has developed partnerships through inter-governmental agreements but also at the level of business encouragement, with concerted efforts being made with entrepreneurs and countries in its region, in order to achieve osmosis and co-operation.

Cyprus as he said, has started cooperation with countries such as Israel, Jordan, Poland, England and is expected to start cooperation with Italy and France. He noted that he was in touch with the ambassadors of these countries, who express their determination and commitment to economic and scientific diplomacy.

Innovation in the public sector
————————————————– –
Asked about the need for innovation in the public sector, Kokkinos said that in the governance system adopted by the state, each ministry has its own Chief Scientist and each ministry sets its own research and innovation priorities and actions. As he said, with the coordination and support of the Office of the Chief Scientist, Ministries come into contact with the research and business community and efforts are made to find solutions and innovation. That as he said, leads mainly to social innovation, to something that “will improve the quality of life of the citizen or the way it deals with the public. ”

At the same time, Kokkinos explained that innovation was not just about technology, but “about everything that is new and is bringing about a drastic change”. He explained that in all sciences there was a need for innovation, both in the social sciences and humanities, but also through interdisciplinary innovative actions.

He added that every technological opportunity that comes into the market raises serious questions, ethical, humanitarian, existential, sociological and more.

He also referred to many such dilemmas that exist today and cannot be answered by a technologist, such as self-driving cars, the ability to read someone’s thoughts that is currently possible at the laboratory level, and the capabilities of drones to spy.

“More than ever, we need humanities and social sciences to look at dilemmas that technologists can`t answer,” he said.

We must see our children as “digital natives”
————————————————– ————
In the field of education, Kokkinos acknowledged that Cyprus was a follower in research and innovation, but pointed out that this was not only a problem for the Ministry of Education and the education system, but also of the way the family was raising today`s children.

In schools, he said, there’s a need for programs to aid research and creative thinking, problem management and problem-solving, in order to create tomorrow`s knowledge workers.

“I have very direct and close contacts with both the Minister of Education and Ministry official,  to see how we adopt this revision of the education system. I believe we will be able to do it slowly, “he said.

He noted that there were very good examples in other countries, such as the Scandinavian countries as well as the UK, whereas he said, the education system promotes research and innovation.

He added, however, that parents should also realize that “our children are born and act digitally, they are digital natives and we, the older generations, parents, were born in an analogical world, so we are digital immigrants.”

As he explained, the challenge for the child was to filter what she or he sees on the internet, to evaluate, to reject and to even challenge the information.

Finally Kokkinos referred to the “Researcher Night 2019” to be held on September 27 in Nicosia, as well as in many European cities and invited everyone to attend. As he said, at the event, visitors, both young and older, will have the opportunity to see scientists and professional researchers. The event, as he said, would also help the visitor realize “that our competitiveness as Cyprus, the competitiveness of every student, of every professional is its ability to produce and utilize knowledge”.

By In Cyprus
Previous articleTrump says he is in ‘very strong position’ on Iran
Next articleCyprus drafts National Plan for tourism aiming at five million tourist arrivals by 2030, Deputy Minister says