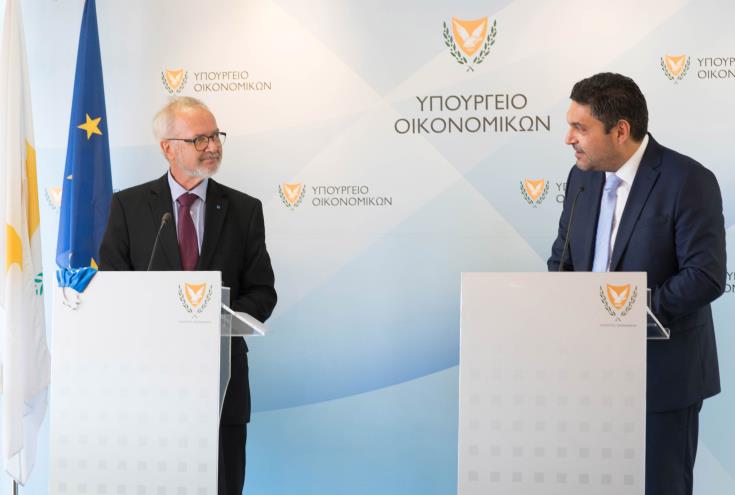 The Republic of Cyprus maintains the leading position among the European Investment Bank (EIB) shareholder countries for 2020 with agreements for projects that correspond to 1.5% of the GDP of Cyprus, Minister of Finance Constantinos Petrides, has said, after a meeting he held in Nicosia with EIB President Werner Hoyer.

He added that programs amounting to €500 million have been approved by the EIB.

An additional €200 million is expected to follow by the end of the year.

He noted that since 2013 the EIB has funded projects in Cyprus amounting to €1.7 billion.

“As far as 2020 is concerned, Cyprus maintains the first place among the EIB shareholder countries with agreements for financing projects that correspond to 1.5% of the GDP of Cyprus” Petrides said.

Cyprus, he said, was the first country that signed the participation agreements in the Pan-European Guarantee Fund.

The first instalment was approved on the 2nd of September and is a loan of €200 million.

He also pointed out that the banks participating in the Entrepreneurship Fund have already started lending.

In his statements, Hoyer, said that Cyprus is his first foreign trip after the lockdown, something, as he said, that shows that “we are very sensitive with regards to issues of Cyprus”.

He expressed gratitude that Cyprus was the first EU country to sign up to the Guarantee Fund.

Hoyer, who was received in the morning by Cyprus’ President Nikos Anastasiades, stressed that the Bank does not operate in any other European country more than in Cyprus, which brings that to 1.5% of GDP annually or €500 million approvals so far.

He also said that the Cyprus Gas Import Facility or LNG terminal is of the highest importance for the EU because this will reduce the heavy dependence on fossil fuel use and is in the interest of the energy diversification and security of Cyprus but also in the climate interest of the EU.

Hoyer pointed out that the Bank is particularly interested in those activities and this is why they are also very active on energy efficiency activities in Cyprus, which, as he said, can be extended as well.

He also referred to the Cyprus Entrepreneurship scheme worth €200 million.

In addition to that he said there could be some other deals with broadband companies, the national roads system, and the Vasilikos power plant.

The Bank, Hoyer continued, has been very active from the beginning in the Covid-19 challenge, and recalled that it gave billions of euro for the research of new vaccines.

“I think we are quite successful, we have put a couple of billion euro into the research and development of a vaccine and I am optimistic that by the turn of the year we might see the first results of this research and development. And then it will be important to develop and distribute in a fair manner those vaccines within the EU and globally”, he concluded.