The death rate from assault in Cyprus in 2016 was 1.3 per thousand, which is the fifth highest in the European Union and twice the EU 28 average of  0.6 per thousand according to figures released by Eurostat on Wednesday.

According to Eurostat 12 people — seven men and five women — died following assault in Cyprus in 2016.

Death is due to assault if it results from homicide or injuries inflicted by another person with intent to injure or kill.

Deaths related to legal interventions or to war are excluded. 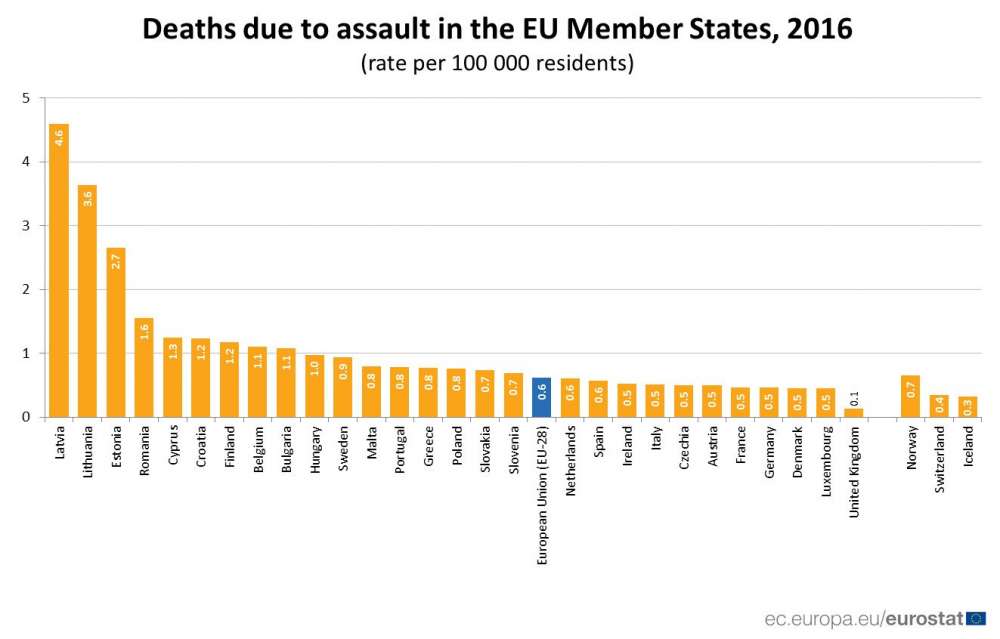 Assault death rate highest in the Baltic States, lowest in the United Kingdom

At the opposite end of the scale, the United Kingdom recorded the lowest rate of deaths due to assault in 2016 (0.1), followed by eight Member States with a rate of 0.5: Luxembourg, Denmark, Germany, France, Austria, Czechia, Italy and Ireland.

In order to compare the rates between countries, the number of deaths has been standardised to take into account their different sizes and age structures.

The source data for the number of deaths can be found in Eurostat table hlth_cd_aro. For the standardised death rates the source tables are hlth_cd_asdr (2002 – 2010) and hlth_cd_asdr2 (2011 onwards).

By In Cyprus
Previous article587 drivers caught driving under influence of drugs in 18 months
Next articleNo-deal Brexit will be stopped, former finance minister Hammond says