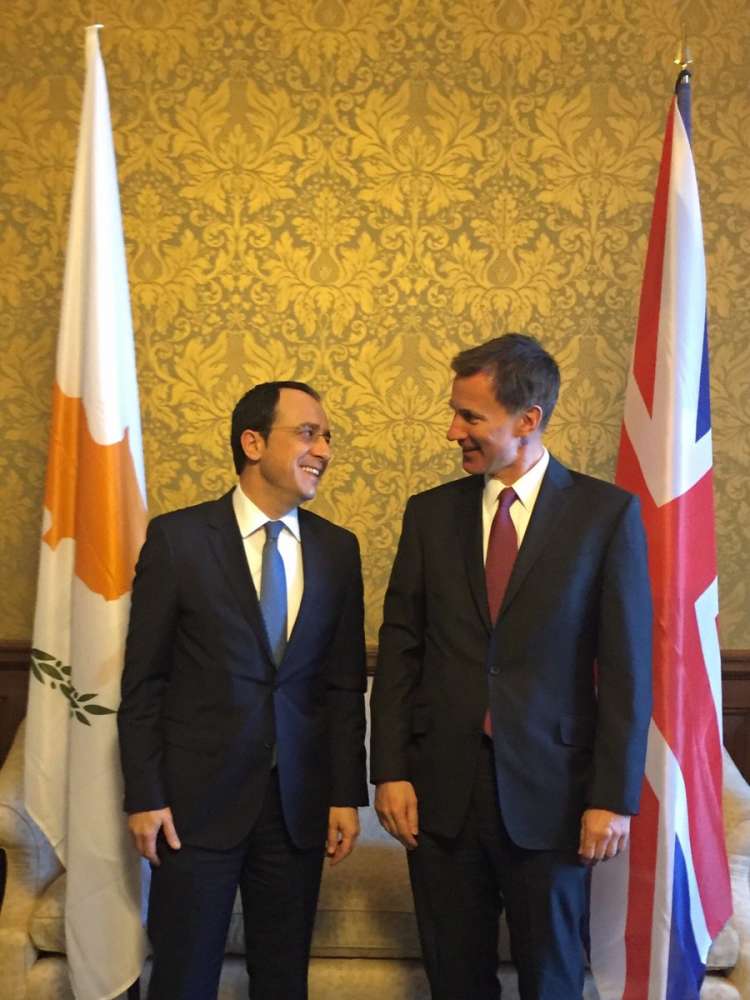 The efforts to resume settlement talks on the Cyprus issue, Brexit and other bilateral issues were discussed during a meeting held in London at the Foreign Office on Tuesday morning between Foreign Secretary Jeremy Hunt and Foreign Minister Nicos Christodoulides.

The meeting was described as “preparatory” to the one that will be held later this afternoon between Prime Minister Theresa May and the President of the Republic of Cyprus Nicos Anastasiades at 10 Downing Street.

On the Cyprus issue Christodoulides asked his counterpart to reconfirm the UK position on the chapter on Security and Guarantees, as publicly stated by the former Foreign Secretary Philip Hammond, that London does not claim to remain a guarantor power as part of the settlement framework and that it is ready to accept any future security arrangement agreed by the two sides in Cyprus.

The Cypriot Foreign Minister also called for a public statement by the UK Government which would clarify that the Brexit process does not in my way hinder the immediate resumption of the Cyprus issue settlement talks, as Turkey seems to be arguing.

As far as the settlement negotiations are concerned, the Cypriot side stressed that they need to resume from the point they were interrupted in Crans Montana, in 2017. Christodoulides also conveyed to his counterpart the need to make use of what has been achieved during the recent negotiating process.

Thank you to Cypriot FM @Christodulides ?? for announcing that UK Nationals in Cyprus will be protected in any #Brexit scenario. A reflection of the importance we both place on our citizens as we look to the future of our great relationship pic.twitter.com/2NTknCCtAe

On the guarantees and security issue Christodoulides made clear that the settlement framework cannot include neither any intervention rights for third countries nor the permanent presence of foreign troops on the island.

They also discussed the matter of UNFICYP, with the UK being the penholder of the relevant UN resolutions.

Hunt updated Christodoulides on the next steps the British government intends to take regarding Brexit. They then discussed the ways by which a Brexit deal could be sealed and the ‘no deal’ scenario be avoided.

The meeting also covered a series of bilateral issues. The two ministers discussed the prospect of drawing a road map charting the desirable progress on these issues over two or three years, once the situation over Brexit has been settled.

In this framework it was agreed that the January 2014 agreement between the two governments for non-military development within the British bases’ areas should start being implemented in the current year.