Cyprus and Serbia sign 5 MoUs, announce intention to have trilateral cooperation with Greece 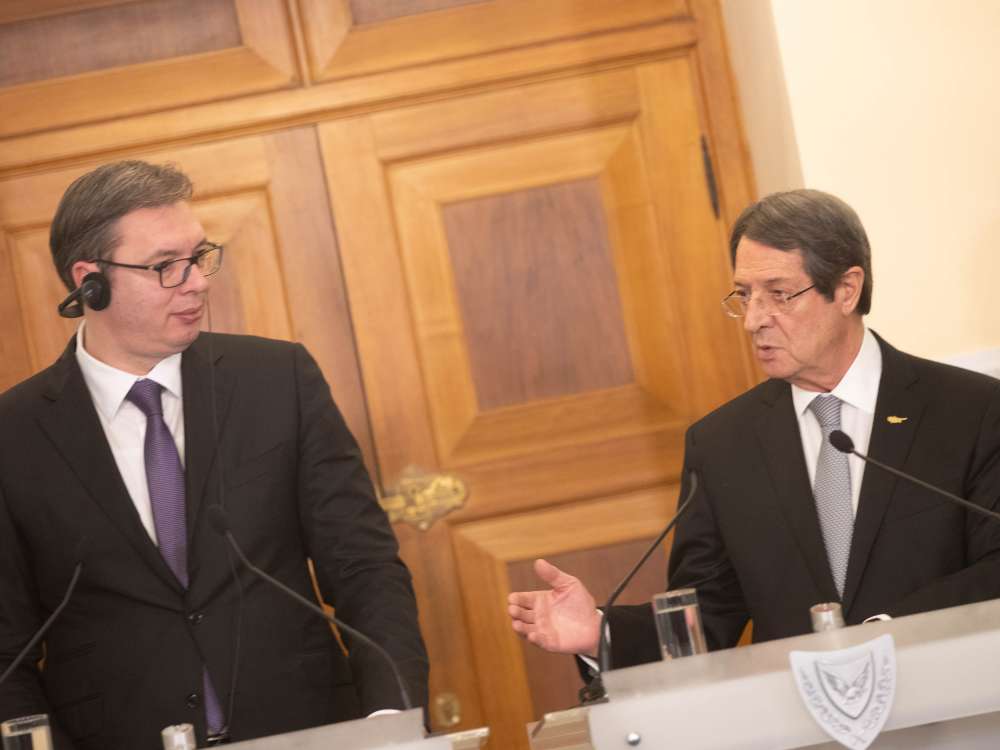 Cyprus and Serbia signed on Friday five Memoranda of Understanding for cooperation in the fields of political consultations, European integration, education, sports and the Diaspora, in the context of the 2nd Intergovernmental Conference, hosted in Nicosia.

In statements after the memoranda were signed President Nicos Anastasiades announced the intention of the two countries to establish a trilateral cooperation mechanism with Greece.

The mechanism will include “areas of common interest and mutually beneficial cooperation aiming to promote peace, stability and security in the Balkan region and the Eastern Mediterranean,” he said, adding that discussions will continue with Greece. He further expressed the hope that further announcements will be made on the matter in the beginning of 2019.

Referring to developments in relation to the dialogue between Belgrade and Pristina, he said that he “reiterated the Republic of Cyprus’ clear position that in the absence of a mutually acceptable solution on the matter of the region’s status, Cyprus considers that the unilateral declaration of independence of Pristina is illegal.”

He also conveyed Cyprus’ political support to Serbia’s European course both within the EU but also in the context of providing expertise.

President Anastasiades also said that he briefed Serbian President Aleksandar Vučić on the efforts undertaken so that talks on the Cyprus issue with prospects to succeed to resume.

A process, he added, which apart from been well prepared in advance, as the UN Secretary General acknowledges it should, should be “based on the UN resolutions, the European Acquis, existing convergences, including a map on territorial adjustments and an outline of six points by the Secretary General.”

He further expressed his government’s and the Cypriot people’s “gratitude and appreciation for the consistent and stable positions of principle you have shown over time on the solution of the Cyprus problem, as well as for the position you always express that in order for the sought-after solution to be viable and functional the Republic of Cyprus’ evolution should establish a normal state, far from any foreign dependencies.”

Anastasiades also announced that a business forum will take place in the near future in Nicosia with the support of the Serbian – Cypriot business association and the two countries’ chambers of industry and commerce aiming to create new opportunities for economic, trade and tourist cooperation between the two countries.

Serbia’s President expressed his gratitude to Anastasiades for the responsible approach on the current problems in the country and abroad and the support he has offered to Serbia’s European course.

“You will always have our support in any level, whether state, governmental or on the level of cooperation of the two peoples,” he said.

Vučić also thanked Cypriot Foreign Minister Nicos Christodoulides on the support he offered Serbia recently at Interpol level, assuring that he would never forget it.

Referring to the 3rd Intergovernmental Conference and the trilateral meeting between Greece, Serbia and Cyprus both due to take place in 2019 he said that during those meetings all possible ways of cooperation in areas such as culture, education even in natural gas will be discussed, although he clarified that Serbia also has a prospect of been supplied with natural gas by Russia.

By In Cyprus
Previous articleWhat do Cypriots spend their money on?
Next articlePolice search offices of Deutsche Bank board members