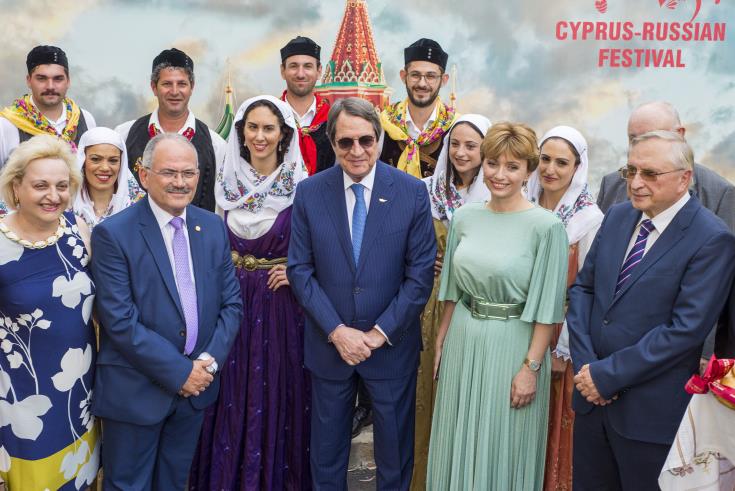 During the opening ceremony of the Festival, the President said that the two countries and their peoples had deep and long-lasting historical, political, cultural and religious ties, which proved to be resilient both in time and through a number of challenges.

As he said, a common goal, as reaffirmed at his recent meeting with Russian President Vladimir Putin, was to find new ways of mutually beneficial cooperation and to strengthen existing synergies.

At the same time, he said that the Government and the Cypriot people are grateful for Russia’s principled stance in relation to the efforts to achieve a comprehensive settlement of the Cyprus problem, based on international law and UN Security Council resolutions as well as the principles and values of the EU.  Cyprus has been divided since the 1974 Turkish invasion and the UN-backed talks aim at reuniting Cyprus under a federal roof.

In addition, he said that Cyprus appreciates the value of this mutual relationship as well as the confidence the Russian people have shown in Cyprus and its economy through business activities.

Moreover the President expressed his deep gratitude to the Russian Ambassador, Stanislav Osadchiy, for his close cooperation and dedication to the further expansion of the already excellent relations and ties between the countries.

He also expressed the government’s and the Cypriot people’s gratitude to the active and friendly Russian community in Cyprus, which as he said, contributes to the strengthening of interpersonal relations between Cypriots and Russians.

President Anastasiades also said that the government decided to sponsor with €20, 000 annually, the Cyprus-Russian Festival, which attracts more than 12,000 people and is an important cultural event in Cyprus.

Russian Ambassador in Cyprus Stanislav Osadchiy, conveyed  a message from the Russian Foreign Minister Sergey Lavrov, who said that Cyprus has long been a stable and good partner of Russia in Europe.

In his message, Lavrov pointed out that the common religious and cultural heritage of the two peoples and the sincere feelings of friendship and sympathy that constitute the solid basis of the cooperation between Russia and Cyprus.

“Our goal is to preserve and strengthen our common heritage and pass it on to the next generations,” he added.

He expressed his confidence that the Cyprus-Russian Festival contributed significantly towards this direction, strengthening trust and mutual understanding between the citizens of the two countries.

By In Cyprus
Previous articleSituation in Denia quiet on Sunday, local authorities tell CNA
Next articleCyprus second in the 2019 GSSE medal list