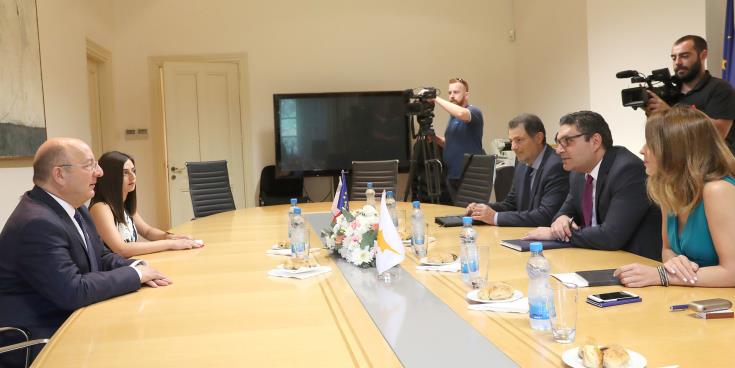 Cyprus and Malta — both on the front line of the migration influx — said on Thursday they would coordinate more closely on the issue.

This was decided at a meeting in Nicosia between Interior Minister Constantinos Petrides and Maltese Minister of Home Affairs and National Security Michael Farrugia.

Petrides said that Cyprus and Malta cooperate in the EU level and especially at the Council of Home Affairs.

“We just confirmed that we will keep supporting each other’s position and also coordinate in the next few weeks more closely with other Mediterranean countries about a common stance with the new Commission regarding pushing forward the revision of Dublin Agreement,” Petrides told the press, following the meeting.

Under the EU’s Dublin Agreement  Member State responsible for examining an asylum application is based primarily on the first point of irregular entry, something southern European countries say does not ensure equal burden sharing among EU states.

Petrides said the EU should push for a more efficient policy and for solidarity towards the countries which are in the forefront, pointing out that each country has its particularities but all countries can help each other.

Petrides also said that he briefed the Maltese Minister on the issue of the buffer zone on the island and the movement of migrants through there, issues related to Turkey not fulfilling its obligations and issues that have to do with border protection in general.

According to the Interior Minister, Cyprus cannot protect its sea border line on the north of the island because of the Turkish occupation and this was brought up in the discussion he had with his Maltese counterpart.

The Maltese Minister said that they have been in cooperation in various Council Meetings and both countries are trying to understand more each other with regards to specific issues they are faced with.

He said that as regards the asylum seekers, both countries have been promised specific things “which were actually not delivered”.

“It is about time that we understand more each other, support each other, come up with proposals and be proactive and by proposing a number of ways forward to combat the smugglers”, he said.

Farrugia went on to say that people who make money out of the migration crisis, in certain instances they also support “malicious terrorist groups”. He also pointed out that solidarity and burden sharing as regards the relocation of migrants, should be discussed.

Cyprus is the top refugee receiving country by share of its population in the EU.

In 2018, Cyprus recorded an 70% increase in asylum applications, as 7,610 people applied for asylum, approximately 0.9% of the country’s population.

Meanwhile, Petrides told the media recently that a total of 3,060 asylum seekers have crossed into the government controlled areas from the Turkish occupied north from the beginning of 2019 to June 2 and authorities are struggling to cope.

President Nicos Anastasiades has raised the issue with the EU while Foreign Minister Nicos Christodoulides will be raising it with the UN, he said.

“We are now examining the practical implementation of the Green Line regulation,” — which governs the movement of goods and people across the Green Line, Petrides said but would not elaborate.