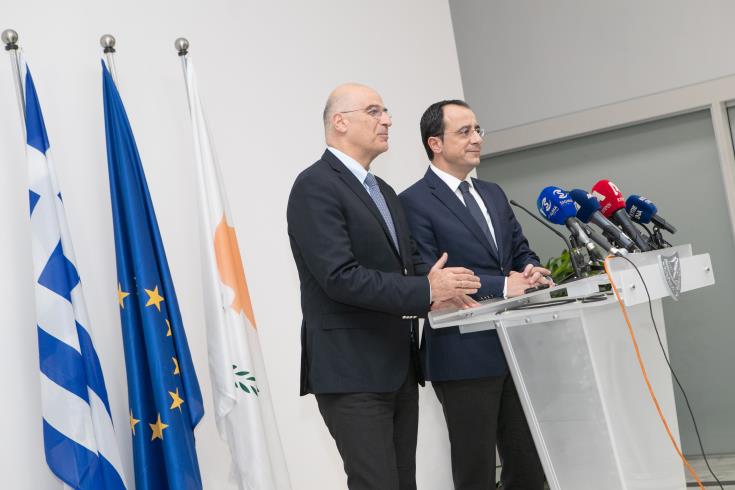 The Foreign Ministers of Greece and Cyprus, Nikos Dendias and Nikos Christodoulides are calling on countries that respect international law to join them in their common initiatives to create the proper infrastructure to improve the lives of their countries’ citizens.

The two Ministers made statements to the press at the end of Dendias’ one day visit to Libya and Egypt on Sunday.

During their meeting at Glafcos Clerides International Airport in Larnaca, Dendias briefed Christodoulides on his shuttle visits to Libya and Egypt and the two discussed preparations for the signing of the intergovernmental agreement between Cyprus, Greece and Israel for the construction of the EastMed pipeline.

In remarks to the Press, Christodoulides said the proper infrastructure is being built to handle actions that cause instability in the region.

On his part, Dendias clarified that the signing of EastMed does not constitute a reaction to the Turkish actions; instead it is a continuation of the efforts of the three governments that have signed it to promote the welfare of their peoples.

He also extended an invitation to states that respect international law to joint forces in securing and safeguarding stability in the region.

Christodoulides said Dendias informed him about the results of his recent visits to countries, which he described as important, noting that there has been coordination between the two men.

“Our approach is common, and so are our goals and I believe the proper infrastructure is being created to handle any moves by some who aim to create an unstable situation in Eastern Mediterranean, violating international law”, said the Cypriot FM.

The Republic of Cyprus and Greece, he added, “aim to attract partnerships without excluding anyone, always on the basis of a positive approach. This is our call to all the countries of the region”.

The Foreign Minister of Cyprus said that they will meet again with his Greek counterpart in the next days as there will be more meetings on a bilateral and multilateral level.

On his part, Dendias said that he briefed Christodoulides on the results of his tour in the Gulf and his visits to Egypt and Libya. “We also discussed preparations for the signing of the EastMed agreement in Athens on 2nd January 2020”, he said.

Dendias repeated Christodoulides’ appeal to countries in the region which “perceive international law as something natural” saying that “they are most welcome to participate in our common initiatives”.

Invited to comment on statements made earlier Sunday by Turkey’s President Recep Tayyip Erdogan, Dendias said “international law and international treaties are sufficient to reply to any arbitrary action, position or statement”.

Asked if the signing of the EastMed agreement is an answer to Turkey’s actions, Dendias replied that with Christodoulides they agree that what they are doing is not in reaction to a third party but rather “an effort to improve the life of our citizens, to improve our economies, to provide solutions.”

“EastMed is a great boost for the energy stability of the EU. Our initiatives are not aimed against anyone; instead they are positive steps and we invite everyone who agrees with them to join” he added.

Regarding the results of his visit to Egypt and if there has been any development concerning the delimitation of the EEZ of Greece and Egypt, Dendias said that on January 8 there will be a meeting with the Technical committees. From then on, “everything is on the table for discussion. Christodoulides said that if there is any development, “rest assured we will announce it”.

Earlier Sunday, Foreign Minister Dendias traveled to Benghazi, Libya where he met with the head of the Libyan National Army, General Khalifa Haftar.

A ministry statement said the meeting was held as a follow-up to the visit of the President of the House of Representatives of Libya, Aguilah Saleh Eissa, to Athens on December 12, and subsequent communication by the Minister of Foreign Affairs with the latter.

The discussion focused on the situation in Libya and prospects for resolving the crisis, the ministry said in the statement.