Cyprus and Greece coordinate their actions on migration 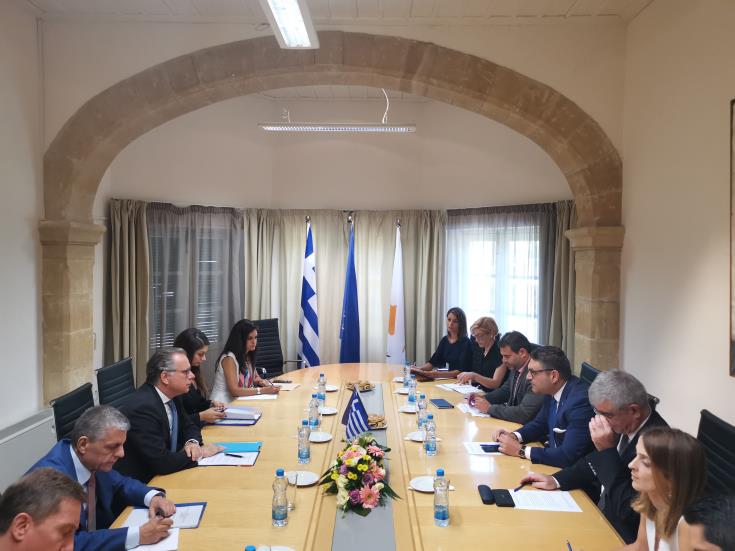 Cyprus and Greece are coordinating their actions ahead of developments at European Union level in order to raise the issue of massive migration flows along the Eastern Mediterranean route and demand a new European migration policy that will translate the principle of solidarity into practical policy, Interior Minister Constantinos Petrides and Greek Alternate Minister of Citizen Protection, responsible for immigration, George Koumoutsakos said on Monday, after a meeting in Nicosia.

In view of the EU’s failure to come up with a holistic migration policy and given the fact that a new European Commission will assume duties, the frontline countries and especially the Eastern Mediterranean countries must coordinate their actions, Petrides told the press after the meeting.

“The increased and massive migration flows through the eastern Mediterranean route need to be further highlighted and we must see this translate into practical policy at European level,” said Petrides.

He noted that both him and his Greek counterpart were concerned about the situation in Syria and particularly in Idlib, as well as about security issues that could arise as a result of massive migration flows.

The Minister said that the two countries aimed to coordinate their actions ahead of the meeting of the EU home affairs council on October 8, which is expected to discuss migration,to bring about a change in Europe’s migration policy and devise a framework that will put the principle of solidarity into practice.

Petrides said that they also discussed the 2016 EU-Turkey statement on migration, noting that Turkey refuses to cooperate with Cyprus and this should be taken into account when shaping the EU’s migration policy, which foresees billions of funds to aid Turkey in dealing with migration flows.

The Greek Alternate Minister stated that tackling and managing the migration issue is a crucial issue.

The Greek Alternate Minister noted that the time was right for a such a coordination, as the President of the new European Commission has among her top priorities a new European immigration policy. He also noted as a positive development that would allow more convergences at European level the appointment of a new Interior Minister in Italy

With regard to the EU – Turkey statement, Koumoutsakos underlined that it is the most functional framework to address the challenge of migration and that it must be implemented.

By In Cyprus
Previous article“Get ready for Brexit” campaign launches in Cyprus
Next articleTrump says U.S. reaches trade deals with Japan, no word on cars