Cyprus and Germany agree to intensify cooperation as part of PESCO 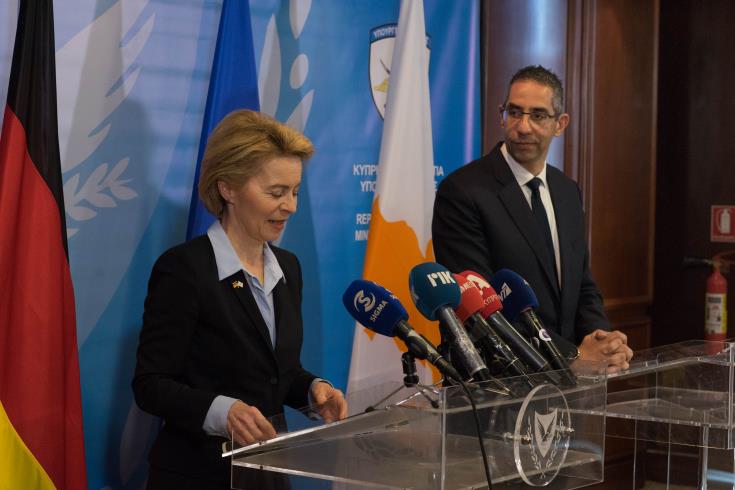 Cyprus and Germany agreed on Tuesday to intensify their cooperation on projects in the framework of the EU’s Permanent Structured Cooperation (PESCO), with Ursula von der Leyen, Germany’s Federal Minister of Defence saying that Cyprus is a valuable partner for Berlin.

The German Defence Minister, who is paying a visit in Nicosia,  held a meeting this morning with her Cypriot counterpart, Savvas Angelides, followed by a meeting with the participation of the delegations of both sides, discussing PESCO, bilateral relations and the situation in the Middle East.

In statements later to the Press, the two Defence Ministers underlined their willingness to strengthen relations in the fields of security and defence. Cyprus is choosing to be actively present in the new security and defence architecture of Europe, said Angelides.

Von der Leyen also said that it is important for Germany, as a European nation, to show solidarity in asking all countries to abide by international law.

Furthermore, she said that “Cyprus is a very active country in PESCO,” adding that both countries are participating in projects, mainly concerning military mobility and a network of logistic hubs.

“We have agreed to bring our experts together so that we intensify the work” within PESCO, the German Defence Minister went on. “Cyprus has a unique selling point of capabilities here and Cyprus has a unique geo-strategic location. Both of them makes it very valuable to have you as a project partner in PESCO,” she underlined.

She assured, moreover that “we will together strengthen our European projects that we are working on.” According to the Minister, the two sides are also discussing other geo-strategic projects in the area.

Summing up her meeting with Angelides, von der Leyen said that “we had indeed excellent talks. We are very close partners and the relationship is trustful between Cyprus and Germany in all respects. That was visible today in our bilateral talks” she concluded.

From his part, Angelides said von der Leyen’s visit is particularly important and takes place at a very crucial period for Cyprus and the wider region.

“The presence here today of my German colleague demonstrates again the willingness of our countries to further strengthen and develop our relations in the fields of security and defence” he underlined.

He said moreover that the latest international developments and geopolitical changes in the wider region have created a political situation that is particularly unpredictable and fluid, which also makes the security environment more complex.

“Taking particularly into account that conditions of stability, growth and prosperity in the wider region are directly linked to the security of the member states of the EU itself, Cyprus is choosing to be actively present in this new security and defence architecture of Europe” Angelides added.

He said that he had the opportunity to discuss with von der Leyen the progress achieved in many areas, but also the prospects ahead, with a view to strengthen bilateral relations, also in the context of the Common Security and Defence Policy.

Regarding the cooperation between Cyprus and German in the framework of PESCO projects, Angelides said that “we strongly believe that now is the time to move decisively towards the deepening of the security and defence policies of the EU, linking up different EU instruments in a coordinated way in order to improve our capacity to act autonomously when and where necessary.”

The Minister of Defence said that with his German colleague they also discussed the latest regional security developments and ways to tackle various threats and challenges. He said, moreover, that he underlined “the constructive engagement and trilateral initiatives undertaken by Cyprus with nearly all of our neighbouring countries in the fields of Security and Defence, with a vision of transforming the Eastern Mediterranean from a zone of instability and geopolitical uncertainty into a region of stability and prosperity, taking also into account the potential of the region`s energy prospects.”

Angelides expressed finally his belief that the visit will pave the way for further strengthening and deepening cooperation, for the benefit of both countries and the entire European family.

Von der Leyen also thanked Cyprus for hosting German Forces for the past 10 years, in the framework of the United Nations Interim Force In Lebanon (UNIFIL).