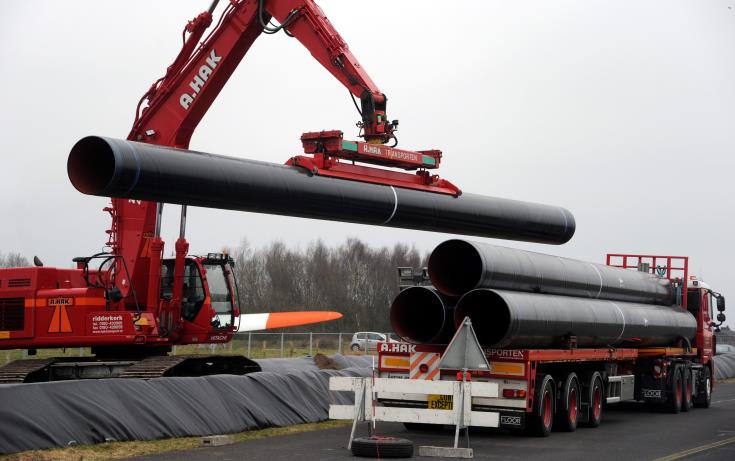 Cyprus and Egypt will be ready in the near future to sign an inter-governmental Agreement concerning a direct submarine natural gas pipeline from Cyprus Exclusive Economic Zone to an LNG plant (Liquefied Natural Gas) in Egypt, Cyprus Foreign Minister Nikos Christodoulides has said.

The Minister, who is paying today a visit to Cairo, has given an interview to the Egyptian newspaper Al-Masry Al-Youm ahead of his visit there, during which he referred to the relations between the two states, the tripartite cooperation with Greece, as well as President of Cyprus Nicos Anastasiades` upcoming visit to Egypt.

Asked about the future cooperation with Egypt concerning Cyprus’ findings in hydrocarbons, he said that `we believe that there is a bright future for the cooperation between Cyprus and Egypt in the field of hydrocarbons as our cooperation is based on solid foundations`.

He recalled that  Egypt was the first country with which Cyprus concluded an EEZ delimitation agreement (in 2003), based on the median line, in full respect of the 1982 United Nations Convention on the Law of the Sea. He also said that the energy cooperation between our two countries forms an indispensable part of our common vision for creating conditions of stability and security in the Eastern Mediterranean.

`The Government of the Republic of Cyprus remains committed to continuing this constructive and results-oriented course of action` he added.

Christodoulides said that `we expect that in the near future our countries will be ready to sign an intergovernmental Agreement concerning a direct submarine natural gas pipeline from Cyprus EEZ to an LNG plant in Egypt. The stakeholders involved are in the process of negotiating the terms for the natural gas sale and the purchase agreements, and hopefully we will soon have positive results.”

As regards a visit of the Cypriot President to Egypt, he said that the two countries are are currently discussing the preparation of a visit of President Anastasiades to Egypt, towards the end of this month, whose main purpose is to inaugurate, along with President al Sisi and Greek President Pavlopoulos, a cooperation program on diaspora matters, called “Nostos, the Return”, in the framework of the trilateral cooperation between Nicosia, Cairo and Athens.

`Of course, on the sidelines of the said event, the two Presidents will have an opportunity to discuss, among other issues, our bilateral relations and key regional developments` he said.

He also pointed out that the partnership between the two countries has gained increased momentum under the leadership of President Anastasiades and President Sisi.

`This close relationship is marked by the exchange of bilateral visits at the highest level, including President Sisi’s visit in November 2017, the first official visit for an Egyptian President to Cyprus since the establishment of our diplomatic relations` he noted.

Christodoulides said that during his working visit in Cairo today and tomorrow he will discuss with his counterpart, Foreign Minister  Sameh Hassan Shoukry bilateral relations, the trilateral cooperation between Cyprus Egypt and Greece, energy issues, the Cyprus problem, EU – Egypt relations, developments in the Eastern Mediterranean and regional issues.  His visit is also taking place in preparation of the upcoming visit of President Anastasiades to Egypt.

`It is no secret that both Cyprus and Egypt have common challenges to face in a number of issues and these can only be addressed through joint and coordinated actions. We are particularly happy to observe that there is a momentum in taking our cooperation forward in a wide array of areas, which includes coordination in international fora. Our aim is to further strengthen and deepen our cooperation in all areas of common interest` the Cypriot Foreign Minister said.

`Against the backdrop of significant challenges faced by our region, we are convinced that this mechanism, together with the network of trilateral mechanisms established so far, can contribute to regional peace, security, stability and prosperity` he pointed out.

The Cypriot Foreign Minister noted that bilateral cooperation has expanded in a wide spectrum of areas of common interest reaching out to the general public as well as to the private sector. In the last three and a half years, we have enhanced our cooperation in the fields of Economy and Trade, Energy, Migration, Tourism, Maritime Transport, Environment, Protection of Cultural Heritage, Information and Communication Technology, Agriculture and the Diaspora.

`We have also stepped up cooperation in the fields of defence, security and countering terrorism. Of course, we stand ready to further, expand, deepen, enrich and, perhaps institutionalize this trilateral partnership` he said.

Asked how Nicosia will deal with a possible Turkish drilling in Cyprus’ waters, he said that on several occasions, Turkey had  threatened to carry out deep-sea exploration activities in areas that fall within the Exclusive Economic Zone and the Continental Shelf of the Republic of Cyprus.

If such threats materialize, Christodoulides said, `both international law and our domestic legislation will be violated, resulting in consequences for those perpetrating the said violation. We are working in order to prevent such activity which will constitute another serious violation of international law, as well as a clear indication of Turkey’s unwillingness to contribute to the settlement of the Cyprus issue.”

`We must not forget that Cyprus’ EEZ is also EU’s EEZ` he stressed.

Christodoulides went on to say that for this reason, at the recent European Council Summit on the 22 March 2018, in Brussels, the European Union Member States strongly condemned Turkey’s continued illegal actions in the Eastern Mediterranean and urged Ankara to cease these actions, and respect the sovereign rights of the Republic of Cyprus to explore and exploit its natural resources.

The European Union and its member states also pledged to monitor closely all relevant developments. We therefore count on the support and solidarity of our EU partners and our friends in the region in upholding international law and legality, he said.

Asked how he views Turkey’s role in Syria, he said that it is well known that from the outset of the Syrian crisis, Turkey focused on regime change and in re-establishing its past status and footprint in its neighbouring country.

The Republic of Cyprus, he added, has repeatedly conveyed publicly its strong condemnation of the illegal Turkish invasion in Afrin in north-western Syria, whose only aim was to enforce Ankara’s geopolitical agenda in the region through the use of military force.

`Cyprus has repeatedly stressed the need for full respect of the territorial integrity, unity, independence and sovereignty of the Syrian Arab Republic.  As you know, Cyprus is also a victim of Ankara’s military aggression since the 1974 invasion of the island by the Turkish army which still occupies one third of our territory in clear violation of the UN Charter and international law` he concluded.