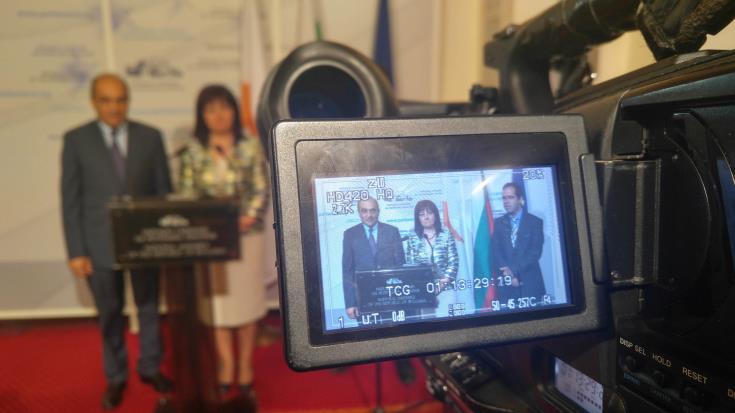 Cyprus and Bulgaria share common concerns about Turkish provocations in Cyprus’ Exclusive Economic Zone as well as common perceptions on how to address these provocations, President of the House of Representatives Dimitris Syllouris said today in Sofia where he is paying an official visit heading a parliamentary delegation.

Demetris Syllouris and his entourage, comprising MPs Costas Constantinou, Stephanos Stephanou and Panicos Leonidou, had consecutive meetings this morning with the Prime Minister and the President of the National Assembly of Bulgaria, Boyko Borissov and Tsveta Karayancheva respectively.

Speaking through an interpreter following the meeting with her Cypriot counterpart, Tsveta Karayancheva welcomed the Cypriot delegation to the Bulgarian Parliament, noting that with President Syllouris they discussed about the good parliamentary relations which have been developed between the two countries over the past years.

Karayancheva thanked Syllouris for the fact that Cyprus was one of the first countries that had ratified Bulgaria`s EU accession agreement, while she referred to the excellent relations between the two countries in the fields of education and culture.

She also referred to the Bulgarian community living and working in Cyprus as well as to the Cypriot students studying in Bulgaria describing them as “a bridge between the two countries”.

Bulgarian House Speaker talked also about the excellent cooperation the two countries have in various international forums and organizations while she made a special reference to the five agreements signed by Bulgaria and Cyprus in the fields of agriculture, tourism, science and education.

She said that during their meeting they discussed about the parliamentary cooperation between the two countries and the prospects to enhance this cooperation.  She also expressed the need to exchange experiences on various issues and policies.

“We talked about the prospects for cooperation in the fields of education, culture and tourism and about the two countries’ ability to offer a common tourism product,” the Speaker of the Bulgarian Parliament concluded.

On his part, Syllouris thanked Karayancheva for the invitation to visit Bulgaria and the very fruitful discussion that they had.

Cyprus’ House President referred to the traditionally friendly and excellent relations forged between the two countries and the need to put into practice the agreements signed by Cyprus and Bulgaria for the benefit of the two countries.

Syllouris thanked the Bulgarian people for its firm support towards Cyprus especially following the 1974 Turkish invasion in Cyprus when Bulgaria had provided jobs to thousands of Cypriots who were forced to leave their homes due to the invasion.

The fact that Cyprus gives nowadays the opportunity to Bulgarians to work in the island is a minimum return to Bulgaria’s huge offer to Cyprus in the past, he said.

In his statements to Cypriot journalists who are covering the visit, the Parliament President said that issues of common interest and cooperation were discussed at the meeting of the Cypriot delegation with the Bulgarian Prime Minister.

In particular, he said that that they discussed about the way the EU is operating and how the problems of small European states are being addressed.

Syllouris said they discussed the lack of a single European policy on hot issues such as migration, climate change, energy and others on which they agreed, as he said, that Europe should have a common policy based on its principles.

The President of the Cypriot Parliament also referred to his proposal in the context of the talk on the future of Europe providing for the small states of Europe to have a common voice while he expressed the need to create a Europe for all its citizens and not just for the citizens of the big European countries.

Replying to a question, Syllouris said that they discussed with his interlocutors the issue of Turkish provocations in the Cyprus’ EEZ, noting that with Bulgaria “we have common concerns and common perceptions on how to address these provocations”.

“What is needed is a stronger European approach also for the issue of Cyprus’ EEZ violation,” he concluded.

In the afternoon, Syllouris and the delegation will be received by President of Bulgaria Rumen Radev.

By In Cyprus
Previous articleForeign Ministers of Greece and Cyprus coordinate on latest Cyprus developments
Next articlePhotiou: Cyprus to carry out excavations for Greek Cypriot missing persons in Tylliria