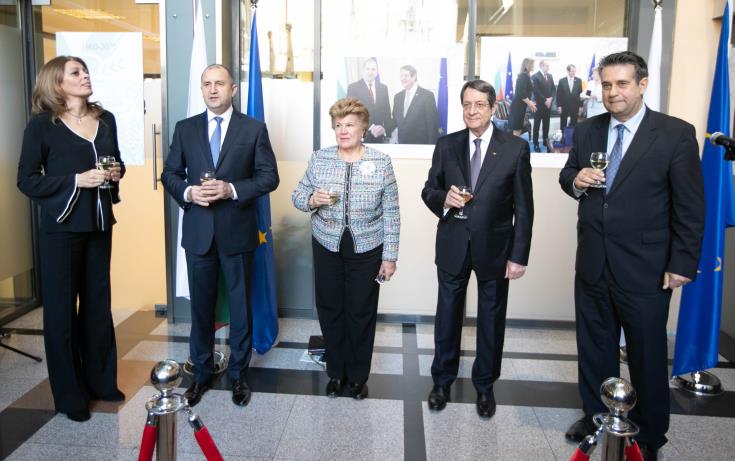 A photographic exhibition in Sofia on Wednesday marked 60 years of Diplomatic Relations between the Republic of Cyprus and Bulgaria.

The inauguration took place in the presence of the visiting Cyprus President Nicos Anastasiades and his Bulgarian counterpart Rumen Radev.

Anastasiades said the exhibition is a token of appreciation towards the Government and people of the Republic of Bulgaria.

“Celebrating the 60th anniversary of diplomatic relations between our two countries is a unique occasion. And the exhibition here today, showcases the historical evolution of our bilateral ties. A journey progressing through time, the foundation of which was laid back in 1960,” the President also said.

The President reminded that in 1960, a few months after the independence of the newly-formed Republic of Cyprus, Bulgaria was one of the first countries that recognised the Republic and opened an Embassy in Nicosia.

The Bulgarian President referred to the presence of 54 Ambassadors at the exhibition, noting it is an international event.
“Bulgaria was among the first countries to establish diplomatic relations with Cyprus 60 years ago, and this act expresses the close historical relations and ties,” he also said.

“We are so grateful to the government of Cyprus for taking care of thousands of Bulgarians who chose to live, work, or study in Cyprus,» he added.

In his address, Ambassador of Cyprus Marios Kountourides said there are numerous occasions where the two countries but more significantly their peoples that prove by example that this bond of friendship and solidarity was evident before 1960 when they established diplomatic relations.

He also said that thousands of Greek Cypriots found home in Bulgaria following the 1974 Turkish invasion of the island.

«Our countries might be small in size but our hearts are definitely not,» he added.