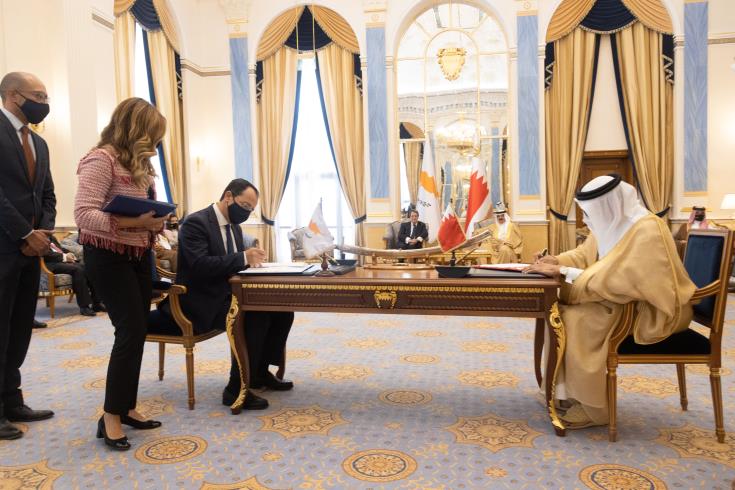 Cyprus and Bahrain have signed a visa waiver agreement for holders of diplomatic, special and service passports between the two countries.

The signing, during a special ceremony in Manama, took place between Foreign Minster Nicos Christodoulides and his counterpart Abdullatif bin Rashid Alzayani late on Monday.

A press release by the Foreign Ministry in Nicosia also said the two Ministers noted with satisfaction the common will of the two sides for bilateral relations to be strengthened.

Christodoulides had accompanied the President Nicos Anastasiades on his official visit to Bahrain on Sunday and Monday.

The press release also said the two Ministers further noted that Cyprus and Bahrain, as small island states in an often troubled region, have a common interest in stepping up efforts to strengthen dialogue and regional cooperation.

This will be in a way that enhances peace, stability and security in the wider region taking advantage of, among other things, the positive momentum created by the signing of the Abraham Accords.

The accords provide for the normalization of relations between Arab countries, including Bahrain, and Israel.

During the meeting, the next steps were considered in the implementation of what was agreed during the visit, including through the exchange of visits, the holding of political consultations between the Ministries of Foreign Affairs of the two countries and  cooperation at the level of Diplomatic Academies.

In addition, views were also exchanged with regard to the possibility of Bahrain joining the network of trilateral cooperation mechanisms that Cyprus and Greece have jointly established with a number of countries in the region.

By Annie Charalambous
Previous articleSome 170,000 flu vaccines to be delivered to Cyprus within the next 15 days
Next articleMet Gala 2021 at the Metropolitan Museum of Art in in New York City