Cyprus among the most active countries in the global police community, says SG of Interpol 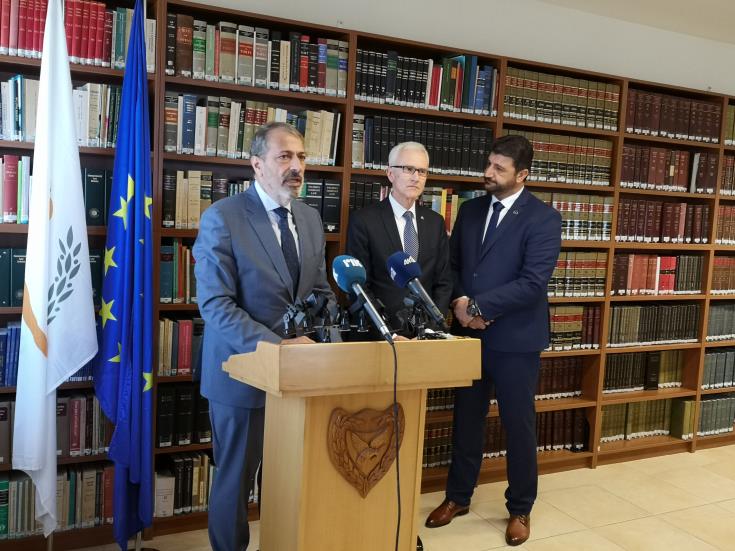 Cyprus is among the most active countries in the global police community, the Secretary General of Interpol Jurgen Stock has stressed, noting that the international police cooperation department of the Cyprus Police is a role model for many other countries worldwide.

Stock is paying an official visit to Cyprus; today he met with the Minister of Justice and Public Order George Savvides.

Speaking after the meeting, Stock said that he is in Cyprus on his first official visit as Secretary General, representing the only global police organization currently with 194 member countries. This visit, he pointed out, is of utmost importance, noting that the Government of Cyprus and the National Police is very successful in providing security in Cyprus and in being a strong partner in the international police cooperation.

“Cyprus is considered a very safe place and there is a reason why annually around 3 million tourists are coming to Cyprus, because they enjoy the beauty of Cyprus and they enjoy being in a very safe and secure environment”, he said.

Stock said that the international police community and the communities are facing a number of significant threats with regards to the development of crime. “International terrorism is more complex and more international than ever, organized and emerging crimes are a multibillion criminal enterprise that are operating across the globe and of course cybercrime, which is borderless by nature, are providing unprecedented challenges for global law enforcement and no country can fight these phenomena in isolation”, he noted.

He went on to say that Cyprus Police is using Interpol as a global platform to share police information. “This is a system that is used here in Cyprus that ensures that relevant information that comes from America, from Asian, from other parts of Europe, from Africa, is available at the front line of policing here in Cyprus and vice versa the sharing of information with international partners is of utmost importance”.

Moreover, he said, Cyprus is sending some of its best police officers into Interpol’s international team, in the headquarters in Lyon and in the hub in Singapore and it also helps Interpol in exploiting new technologies. “One of the Cyprus police officers is currently heading one of our future oriented projects that help the organization to provide relevant services to our member countries”, he added.

“My visit here is a great opportunity to strengthen that partnership. We are looking forward to strengthening this partnership, which is one of the best in our global police community”, he concluded.

The Minister reaffirmed the importance that the Republic of Cyprus attaches to closer cooperation with Interpol in the fight against Organized Crime through international police cooperation and through the exchange of information.

By In Cyprus
Previous articleOpening of beach only to Turkish and “TRNC” citizens is racism, say G/C and T/C organisations
Next articleSouth Eastern European Cinema Network announces competition for short-film funding