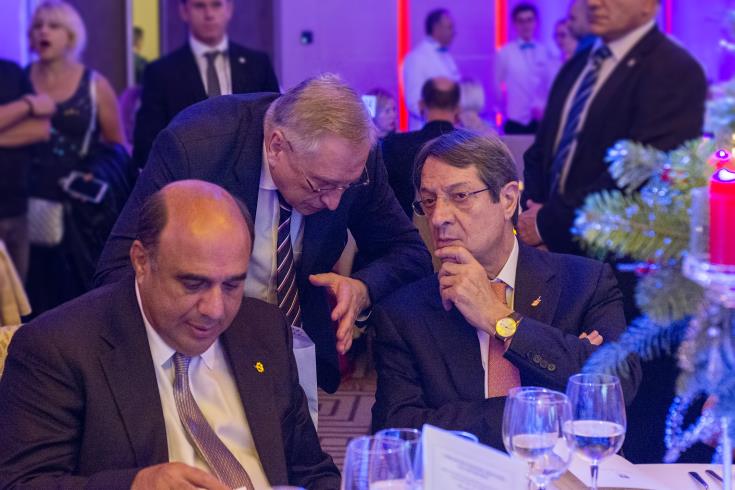 Cyprus will remain a reliable partner of the Russian Federation’s business community and will further advance its position as a significant international hub for Russian and Cypriot business and investment synergies, President of the Republic of Cyprus Nicos Anastasiades has said, adding that relations between the two countries would be strengthened.

President Anastasiades was addressing the Cyprus-Russia Christmas Gala Dinner, organised in Limassol by the Cyprus Chamber of Commerce and Industry and the Cyprus-Russian Business Association, in the presence of Russian Ambassador in Nicosia Stanislav Osadchiy and businesspeople, Russian in their majority.

In his speech, President Anastasiades said “our countries share a long-standing relationship at all levels and in all fields: a relationship founded on concrete and deeply-entrenched political, economic, cultural and religious ties, which is greatly valued by the Government and the people of Cyprus and one which we actively aim to qualitatively upgrade even further.”

He referred to “an important pillar of the relationship between Cyprus and Russia, which demonstrates the quality and depth of our relations: the economic cooperation, business and investments collaborations which are supported and promoted in a systematic manner, always in line with international standards and obligations and the need for transparency and accountability in all investment and business transactions.”

“On behalf of the Government, I wish to convey in the strongest terms that, contrary to unfounded rumours circulated in specific directions, the business community of the Russian Federation, either present in Cyprus or abroad, can rest assured that Cyprus will remain a reliable partner and further advance its position as a significant international hub for Russian and Cypriot business and investment synergies,” he added.

President Anastasiades expressed certainty that “Cyprus and Russia will continue to enjoy a mutually beneficial economic partnership, a vibrant partnership which, founded on a concrete basis, has a prosperous future: a partnership which I have no doubt that both countries aim at further deepening and strengthening.”

“I am also confident that the Russian community living and working in Cyprus – a community which acts as a link between Cyprus and Russia – will continue to develop business, investment, tourism and trade co-operation between our two countries, exemplifying the so often displayed in our common history solidarity between our two peoples,” he said.

Concluding his speech, President Anastasiades conveyed “our highest appreciation for your presence on the island,” noting that “your active contribution to the economy of Cyprus, as well as the cultural wealth you bring to the Cypriot social fabric, is indeed invaluable.”