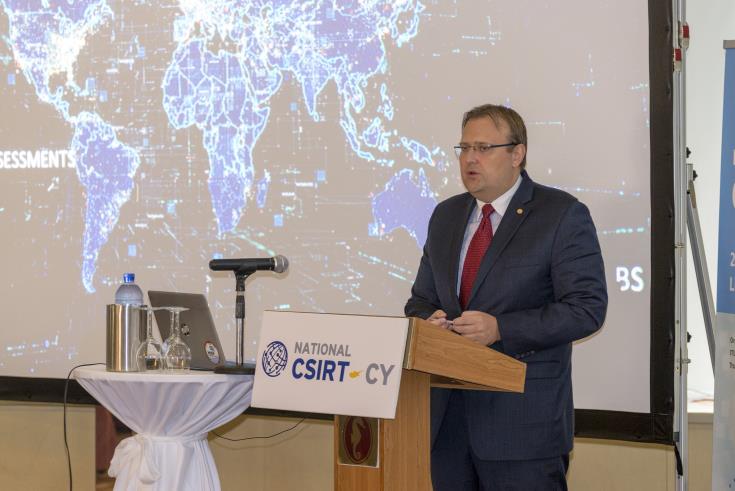 Cyprus is a good reference point in terms of cyber security, both at the international and regional level, head of International Telecommunication Union (ITU) Office for Europe Jaroslaw Ponder has said as he congratulated the government on its long-standing commitment to cyber security.

Ponder spoke on Wednesday at the “ITU Cyberdrill – ALERT conference”, organised by the Digital Security Authority and the Computer Security Incident Response Team in cooperation with the ITU and the Forum of Incident Response and Security Teams (FIRST).

The ITU official said that the national security incident response team which has been just established just a few months ago was at the centre of the attention of the Government but more important, of all the stakeholders who benefit from a safe environment.

“ I would like to congratulate the government of Cyprus on its long standing commitment to the cyber security and we just heard so much is done in this country that places it as a good reference point at the international level and the regional level in terms of cyber security,” he said.

He added that the vision expressed by the Commissioner of Electronic Communications and Postal Regulation (CECPR) George Michaelides a few months ago was not only empty words.

“We are experiencing this in the real terms and what makes us more happy is to see that it brings natural leadership at a regional level and we hope that in the near future at a global level, Cyprus will be one of the most quoted examples how to deal with the cyber threats as the number of the threats is going down as we learned during the last days of this event,” he said.

On behalf of the Minister of Transport, Communication and Works, Deputy Director of the Ministry, Chrystalla Malloupa  said that the Cyprus Government has become very active in recent years, in the area of cybersecurity, with the release of its first National Cybersecurity Strategy in 2013 and the implementation of the new legislation on the Security of Network and Information Systems and Cybersecurity.

“ Cybersecurity has been of growing importance for some time now, and we foresee that this area will only grow in the future, given how the cyber world is by no means isolated, but is nowadays part of almost all aspects of our daily lives”, he said.

In his speech,  Commisioner Michaelides said that within the coming months, the Cybersecurity Strategy of the Republic of Cyprus would be revised and updated following a holistic maturity assessment on cybersecurity in all areas of the Cyprus society and economy, carried out in collaboration with the Oxford University.

By In Cyprus
Previous articleBBC: Parents of slain Briton fly to Cyprus for inquest
Next articleTax to GDP ratio in Cyprus stood at 34% in 2017, according to Eurostat