Cypriots who helped in firefighting effort in Greece return to Cyprus 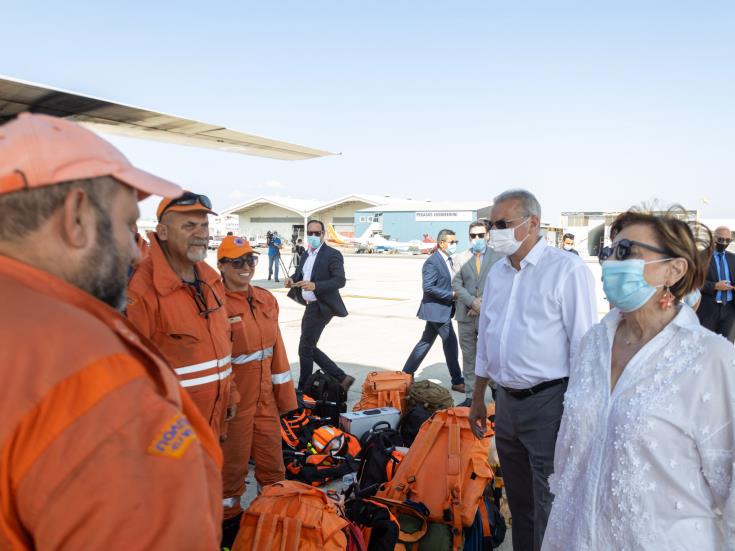 A group of members of the Fire Service and Civil Defence returned to Cyprus on Friday morning and were greeted at Larnaka airport by Ministers of Justice Stephi Drakos and Interior Nicos Nouris who thanked them on behalf of the government for their altruism and professionalism.

In statements the leaders of the two teams Demetris Katsiflis and Chrysilios Chrysiliou said that it was one of the worst fires they have ever had to face in their career, adding that their cooperation with Hellenic Fire Service was impeccable and that during the difficult task they undertook they also received the help of the local people.  They expressed the hope that they will never again be faced with such tragic images.

“It is with feelings of great pride for your contribution in the Greek authorities’ effort to tackle the large fires which for some ten days have been endangering and continue to threaten Greece,” Drakos told the group of returning Cypriots. “You made yourselves available from the first moment and fought courageously against the nightmarish blazes,” she added.

She also said that their efforts were catalytic in dealing with the fires something which was also recognised by the Greek authorities who praised their good training for special missions of increased difficulty and danger. She referred to their “operational readiness and top professional level at critical times”, adding that both the Greek and Cypriot societies “have recognised your efforts.”

On his part, Nouris told them during their mission in Greece they have each shown their character and have honoured their professions, reconfirming that “our small country is a great source of volunteerism.”

He further expressed the Republic of Cyprus and the government’s pride and thanked them for their work.

“I would like to think that we will always respond with the same passion to such calls so that we can help our fellow people,” he noted.

Assistant Chief of the Fire Service Demetris Katsiflis said that the Cypriot mission, was one of the first who were sent to Greece, adding that they started operating from the very first day.

Thankfully, he said, the fires have been contained and so the foreign missions operating in Greece have started leaving, including the Cypriot mission.

Katsiflis said that during their stay in Greece they witnessed tragic images which he wished never to have to do so again. “It was one of the worst fires I have ever dealt with in my career, because it was not just a forest or rural fire but it also involved urban areas and human lives and property were in danger,” he noted.

Every day, he added, was different, “there were new dangers to tackle which we could neither predict nor know beforehand.”

He also spoke of the great effort they undertook, adding that locals “were always by our side, bringing us water, food and encouraging us.” Replying to a question Chrysiliou said that it was perilous task adding that they were professionally concerned because of the dangerous and arduous work but at no moment did anyone bulk.

There were, he noted, a few injuries but taking into consideration the size of the fire, the complexity of the undertaking and the danger they had to face their work was successful.

The group was transported back to Cyprus by a Greek military aircraft C130 and in statements Captain Georgios Marinakis thanked the Cypriots who assisted with the firefighting effort, noting that “at difficult times the Cypriot and the Greek people are always united.”

By gavriella
Previous articleImportant dates announced for new school year
Next articleICUs bed availability is not unlimited and we may run out of beds, Cyprus Health Minister warns