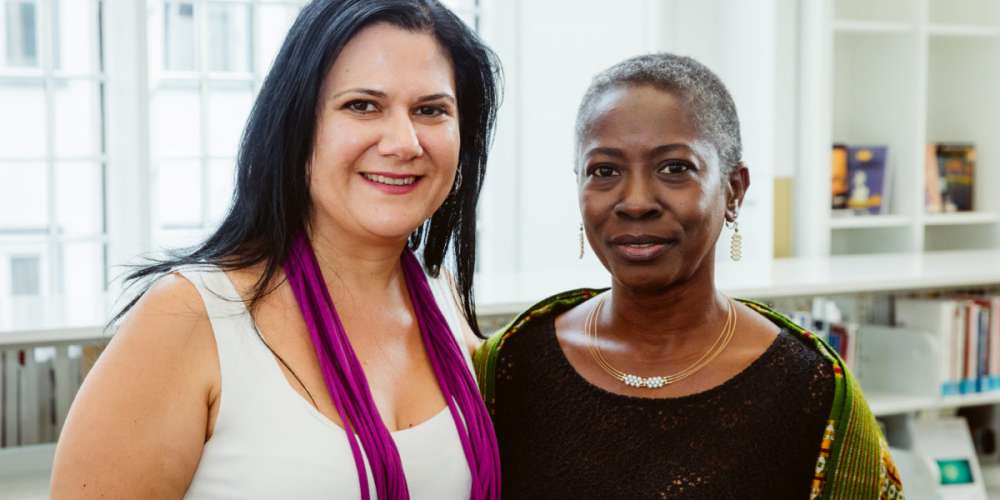 Cypriot Constantia Soteriou (pictured above with one of this year’s panel of judges, Karen Lord),  has been announced the overall winner of 2019 Commonwealth Short Story Prize for Death Customs the first translated story to win what organisers called the world’s most global literary prize.

Death Customs was translated from Greek into English by Lina Protopapa, a translator and cultural critic based in Cyprus.

This year’s panel of judges, chaired by Caryl Phillips, chose ‘Death Customs’, a ‘poetically intense and complex in form’ story as the overall winner.

.@cwwriters is proud to announce ‘Death Customs’ by Constantia Soteriou (left) as the overall winner of the 2019 Commonwealth Short Story Prize. Congratulations to Constantia, and translator @linaprotopapa – ‘Death Customs’ is the first translated entry to win the #CWprize pic.twitter.com/zNh23So4yQ

“Death Customs is a remarkable short story that manages to be both personal – following, as it does, the painful narrative of a woman who has lost her son – and deeply political, in that it charts the division of a land as it topples into civil war. We are encouraged to view the descent into bloodshed and mayhem as a domestic squabble between two brothers who can only be reconciled in death. The voices employed are beautifully resonant, and the story shifts gears, and ranges across time, with eloquence. ‘Death Customs’ is poetically intense and complex in form and subject-matter, yet the story remains admirably lucid and moving, and deservedly wins the 2019 Commonwealth Short Story Prize,” said Phillips.

Constantia Soteriou was born in Nicosia in 1975.

Lina Protopapa, who translated this year’s overall winning story from Greek into English, lives in Nicosia, where she works as a translator and cultural critic

Death Customs’is a story about the women of Cyprus; mothers or wives who were left to believe that their beloved persons were missing after the 1974 war, while the state had clear evidence about their death. It is a story of death customs, memories, bitterness and justice.

“I feel honoured and happy to win this amazing prize; it feels like a reward for all the hard work I have been doing over the last eight years, writing about the perspectives of women on the political and historical events of Cyprus. This prize is a recognition for giving voice to those who did not have the chance to be heard before; those who were left behind to pick up the mess of the war. I grew up seeing the faces of the mothers and the wives of the missing people; those were the real victims of the war. Women should not be victims of any war. Women are the continuation of life. I wrote this story to salute their strength,”  Soteriou said.

You can read Constantia’s prizewinning story on Granta. See the 2019 shortlist and regional winners.

By In Cyprus
Previous articleEnlargement funds cuts and “reassessment” of EIB financing, among proposed EU measures against Turkey
Next articleNew ‘weapons’ in the hands of trapped property buyers