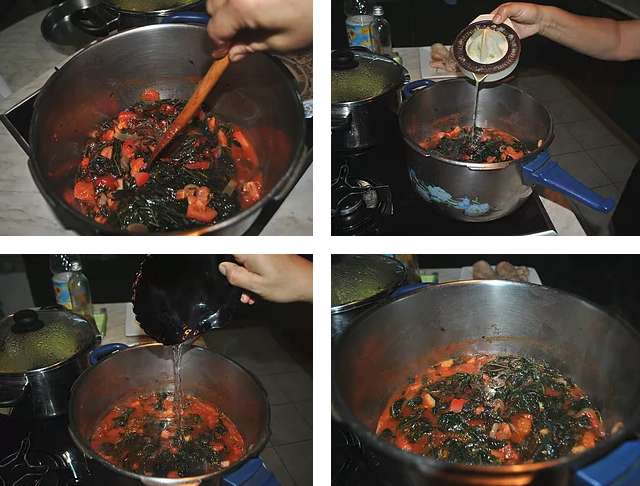 Molokhia is a soup made with jews mallow, meat, and various herbs and spices. Each and every Arab country has their own rendition of Molokhia and this was the first time we had experienced Molokhia with tomatoes!Τry out one of the traditional Cypriot Molokhia Recipes below!

While the water is heating, slice two onions and cube 6 cloves of garlic.

In a large pot add the onion, garlic, and 2 Tbsp of sunflower oil. Fry over medium heat, constantly stirring. Once the onions become soft and clear, add the chicken and allow to brown on all sides. Remove the chicken from the pot and set aside.

In the same pot combine: the jews mallow, 3 Tbsp of Tomato Paste, 1 Tbsp Pepper Paste, 1/4 cup of olive oil, the chopped tomatoes, a few pinches of Salt, juice from 1 lemon, and the 3 cups of hot water. Boil over medium-high heat, stirring occasionally.

After 30 minutes, add the chicken back into the pot, the juice from another lemon, and a pinch of salt.

Made with Love Tip: If too much water has evaporated and the molokhia no longer looks like a soup, add more water.
Cover and cook over medium-high heat until the molokhia leaves are soft (approx. 1 hour).

Made with Love Tip: If you want to cut your cooking time down, use a pressure cooker and cook for 10-15 minutes under pressure, or until the leaves of the Jews Mallow are soft.
Before serving, add salt and lemon to taste. You can also drizzle a little olive oil over the final molokhia.