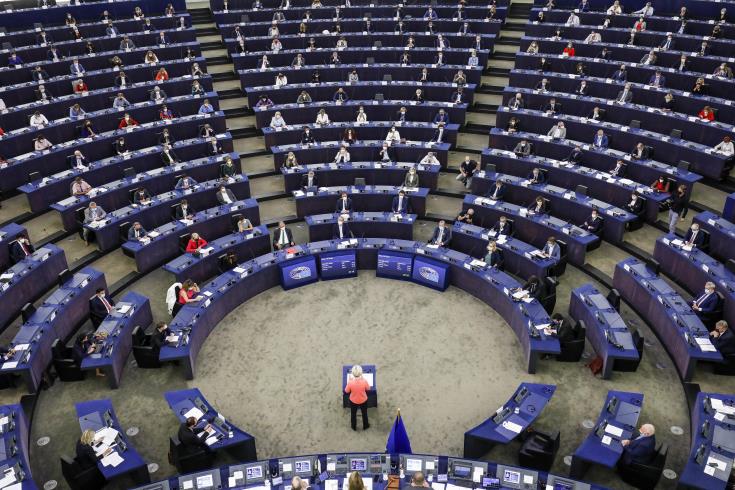 Cyprus’ six members of the European Parliament (MEPs) gave a mixed welcome to the European Commission’s President Ursula von der Leyen’s annual State of the Union speech during the European Parliament Plenary session held in Strasbourg on Wednesday, but were critical of its general remarks on the relationship with Turkey despite its continued provocations against, Cyprus an EU member state.

Speaking to CNA from Strasbourg, Lefteris Christoforou, of the ruling right-wing Democratic Rally DISI and member of the European People’s Party (EPP), highlighted that the EU could face the challenges stemming from COVID-19 because all member-states joined forces and pooled resources.

Asked about von der Leyen’s remarks on Turkey and the absence of any references to Ankara’s provocations in Cyprus, Christoforou said Cypriot MEPs should observe a principled position concerning human rights violations in general, to be justified in seeking sanctions against Turkey when it comes to provocations both against Cyprus and Greece, while Ankara is accused over human rights violations against its own citizens.

On his part, Loucas Fourlas, MEP with DISI and the EPP group in the European Parliament also highlighted that the EU joined forces and pooled resources in tackling challenges that arose from the COVID-19 pandemic, such as the joint vaccination procurement and deploying the Next Generation EU and the Recovery and Resilience Fund.

He spoke, however, of “inconsistencies” on behalf of the EU and the lack of political will in agreeing to a common migration framework. He also spoke of inconsistencies when it comes to human rights violations, noting that the European Commission President criticised violations in countries, such as Russia and Belarus, but when it comes to Turkey, she made a short reference in favor of developing EU relations with the country.

Giorgos Georgiou, MEP of left-wing AKEL and the Left’s group in the European Parliament said von der Leyen “concealed the EU’s weaknesses” in tackling the COVID-19 pandemic. He spoke of lack of solidarity, while noting that less support was given to public health systems from the EU4health fund, compared to the funds announced.

He also appeared cautious over the exit from the pandemic, as vaccinations in the EU reached 70% of the bloc’s adult population but lag behind in poorer non-EU countries, which in turn could trigger more COVID-19 variants. He also referred to the EU Green Deal stating that its target could potentially harm EU households, as European large corporates could absorb EU green funds while an increase in goods’ prices could hamper household income.

Niyazi Kızılyürek, also an MEP with AKEL and the Left group, noted that despite the EU’s belated response during the inception of the pandemic in 2020, the Union marked progress in vaccinations and deployed its own resources in assisting member states in tackling the economic impact from the health crisis.

He noted that challenges lie ahead such the green transition and green growth and the new fair taxation issue and highlighted the “serious problems” concerning illiberal states in the EU which violate their peoples’ human rights.

“The EU is not a player when it comes to the Cyprus problem,” he said.

On his part Costas Mavrides, an MEP with the Democratic Party and the Alliance of Socialists and Democrats in the European Parliament, said the EU’s joint response to the pandemic and its economic impact was successful but noted the EU has not included social criteria in disbursing funds to the member states to combat the consequences of the pandemic.

On Turkey, Mavrides said that there are different approaches on the EU’s response to human rights violations between the different institutions of the EU, that is, the European Parliament, the Commission and the EU Council.

He recalled that although the EU has a legal framework in dealing with human rights violations, the EU is speaking for “new presents to Turkey and the upgrading of its Custom Union with the EU.”

Demetris Papadakis, an MEP with the Socialists and Democrats group in the European Parliament referred to the EU’s ambitious targets over the protection of the environment and climate change, noting that other large countries such as the US and China should follow suit.

He also referred to significant weaknesses in Cyprus when it comes to dealing with climate change, and pointed to the pollution caused by transportation due to the lack of an effective public transportation system.

On Turkey, Papadakis said that there is a “large gap” in the EU’s foreign policy compared to US and Russia. “Therefore we should not have heightened expectations on what the EU could do with regard to Turkey,” he said.

Cyprus has been divided since 1974 when Turkey invaded and occupied 37 per cent of its territory.