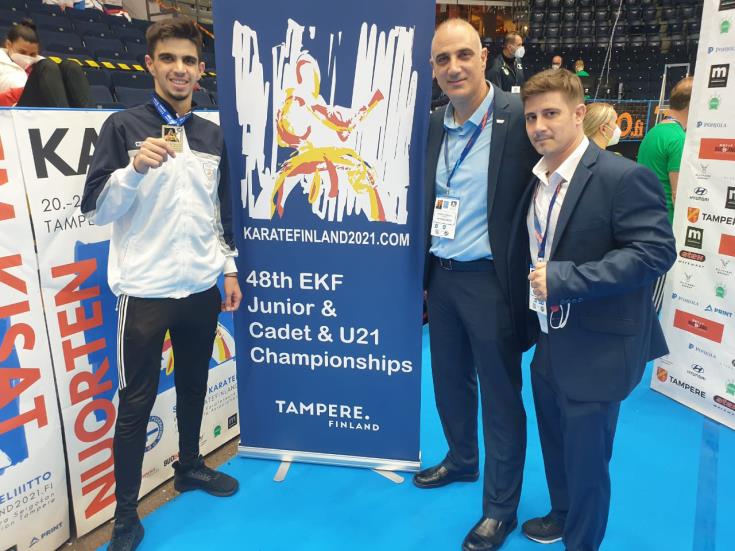 In a thrilling final of Junior Kumite Male -76kg at the 2021 EKF Cadet, Junior & U21 Championships, Loizos Vasilou of Cyprus won a hard-fought title after outscoring Rumil Jafarli of Azerbaijan by 2-1 with a “Yuko” or one-point technique in the last seconds of the bout.

The second day of competition of the 2021 EKF Cadet, Junior & U21 Championships saw the future stars of European Karate giving a demonstration of sensational abilities on the tatami of the Ice Stadium in Tampere (Finland), the competition website said.

A Cyprus Karate Federation press release said that during the second day of the European Karate Junior Championships, Cyprus managed to score ten victories with Andreas Gavriel U16 -52kg, Stavros Charalambides U16 -63kg, Christoforos Kitsios U18 -68kg, Irene Kontou U18 -48kg, Rebekah Economidou U18 -59kg, and five victories by Vasiliou U18 -76kg.

The 2021 EKF Cadet, Junior & U21 Championships concludes Sunday with the last categories at stake.

The Cyprus Sports’ Organisation, in a press release congratulated Vassiliou, noting it is an historic victory for one of its athletes. “It is an international success which promotes Cyprus karate and Cyprus sports in general”.

The CSO also congratulated the Cyprus Karate Federation for its longstanding support to Vassiliou and karate athletes.

By gavriella
Previous articleNew York Streets Flooded After State of Emergency Declared Due To Hurricane Henri
Next articleRapid antigen testing units – Monday 23 August 2021; who is eligible