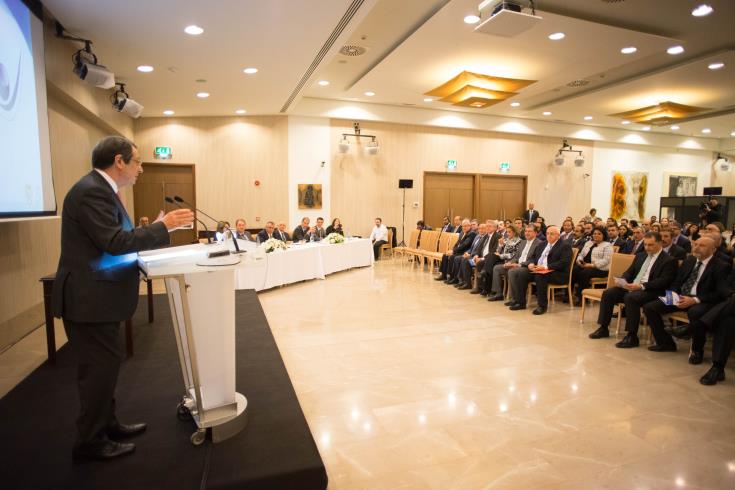 President Nicos Anastasiades has said that there has been a significant increase of exports in recent years, noting at the same time that supporting businesses in practice, by creating a friendly environment and by promoting Cyprus as an international high-level business hub, constitutes a key priority for the government.

President Anastasiades, who was addressing the Cypriot Export Prize 2017 award ceremony, at the Presidential Palace on Thursday, said that total local imports of products came in 2017 to €1.24 billion, including petrol products, recording an increase of 28% compared to 2016.

He also outlined the Statistical Service’s data for the period of January – November 2018 according to which the same exports reached €1.47 billion compared to €1.14 billion in the corresponding period of the previous year, recording an increase of 29%.

Export destinations, President Anastasiades said, included Libya with a value of exports of €264 million, the UK with €116 million and Greece with €75 million. He added that export results to Gulf countries are also “encouraging” and gave the example of the United Arab Emirates which presented in 2017 an increase as an export destination of 22% compared to 2016.

Referring to the services sector, he noted that it was and continues to be the steam-engine powering the Cypriot economy, adding that in 2017 it once more contributed by over 80% to the country’s GDP.

“Supporting our businesses in practice, first and foremost through the creation of a business-friendly environment but also by show-casing our country as an international high-level services business hub, constitutes a key priority for the government,” President Anastasiades stressed.

He also said that the government plans to organise 13 business missions abroad while also supporting initiatives by Cypriot entrepreneurs in various ways.

He further pointed out that already the Ministry of Energy, Commerce, Industry and Tourism has approved 1,137 applications of a value of €87 million, in the context of EU co-funded programmes. Another 180 applications are expected to be approved within 2019 as part of the youth and women entrepreneurship schemes in place. This year, he added, two new funding schemes will open with a budget of €4.5 million on digital transformation and €2 million on clusters.

On behalf of Cyprus Chamber of Commerce and Industry President George Demetriou, Vice President – Services, said the exports prizes have been awarded since 1982 and added that this is the 37th export award event.  Although Cyprus is a small economy which is faced with objective difficulties and limitations in its export capabilities at the same time it can also be described as a dynamic economy which has a spirit of entrepreneurship.

Demetriou spoke, among other things, of how technological advances can help Cyprus’ access to the international market. He also said CCCI’s efforts is to promote a stronger presence of Cyprus and of Cypriot businesses in key areas of important foreign economies.

During his address, head of the export awards selection committee Andreas Matsis said that in 2008 total exports reached €8.62 billion while according to projections in 2018 they reached €14.53 billion, recording an increase of 72.5%.

Referring to the services sector, Matsis said that according to provisional estimates for 2018 tourism comes first with €2.7 billion, followed by commercial shipping with €2.6 billion, financial services with €2.21 billion and ICT services with €1.94 billion. In the sector of services there is always a trade surplus which exceeds 3 billion per year, he said, adding that in the last two years the surplus has been over 4 billion.