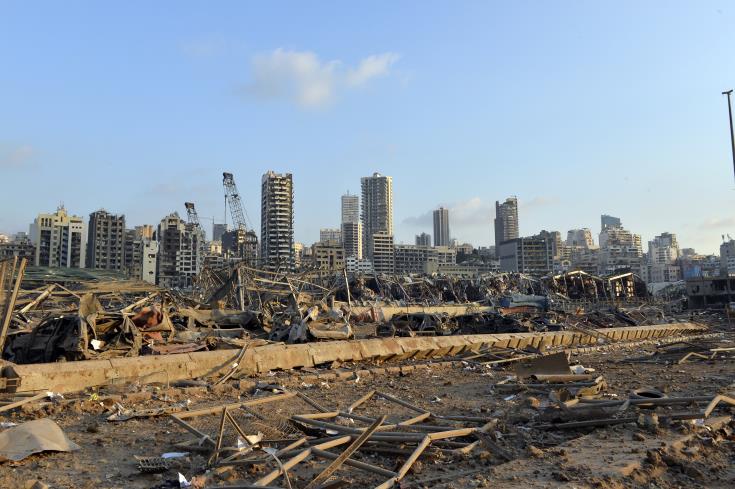 Cypriot Ambassador in Beirut Panikos Kyriakou returns to Lebanon on Thursday, while an apartment has been rented to temporarily accommodate the Cypriot Embassy and the residence of the Ambassador that sustained extensive damages by the huge explosion of August 4 that rocked Lebanon.

At the same time, the Cypriot diplomatic mission is preparing proposals as to how the amount of 5 million Euros which Cyprus will offer to Lebanon will be allocated.

Cyprus President Nicos Anastasiades had announced during the international conference that took place via a teleconference at the initiative of the French President Emmanuel Macron to provide aid and support for the people of Lebanon, that Cyprus will donate this amount of money to cover needs that Lebanon has after the explosion.

Ambassador Kyriakou told the Cyprus News Agency that when the suggestions are made, they will have to be approved by the Foreign Ministry of the Republic of Cyprus for the allocation of money to begin.

We are thinking of giving this money for example to help hospitals in Lebanon, he added.

“We will come into contact with them to learn about their needs, we will also speak with the Red Cross of Lebanon and the Lebanese authorities to use the money in the best possible way to benefit the people of Lebanon. We are at the stage of looking into this issue and I have asked the staff of the Embassy to begin these contacts”, he added.

He noted that the amount of money will not be handed over to the Lebanese government “but we will help projects aiming to benefit the population such as schools, hospitals, churches”.

Moreover, he said that more medical equipment and medicine will be sent from Cyprus to Lebanon.

A number of NGOs and private companies continue to collect supplies, he added.

Asked about the Cypriots who are in Lebanon he said that they are only few and have lived there for many years. We provided help for a couple of cases when this was requested, Kyriakou said.

In regards to Lebanese people who hold Cypriot passports, he noted that many of them are already in Cyprus and those who stayed in Lebanon did not contact the Embassy to request any help.

«Therefore, there is no Cypriot citizen who faces difficulties and has not contacted us”, he concluded.