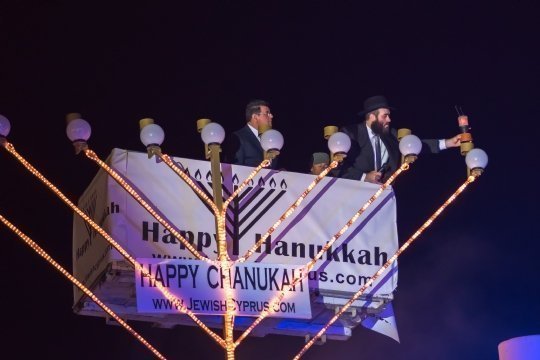 The Jewish Community of Cyprus held its annual public Menorah Kindling Ceremony, this year for the first time “under the stars”, at Larnaca Sea front “Finikoudes”.

The annual event incorporated traditional Chanukah food and entertainment which accompanied the lighting of the largest Menorah on the island.

More than 20 ambassadors and local dignitaries attended, among them, The Director of the Office of the President – The Honorable Photis Photiou, Presidential Commissioner, who addressed the crowd on behalf of the president of the Republic of Cyprus, the Deputy Mayor of Larnaca Iasonides and the Ambassador of Israel in Cyprus,  Sammy Revel.

Hundreds attended the official ceremony. The participants had the opportunity to taste the Chanukah traditional cuisine, composed by the “Latkes” fried potato balls, and sweet doughnuts as well as unique Kosher drinks produced in Cyprus.
The entertainment for the evening was provided by the children of the Jewish community, who put together a musical show for everyone to enjoy.

Chanukah – the Jewish festival of light – started, all across the world, with the lighting of the first menorah candle on the 3rd December. The Jewish holiday of Chanukah is celebrated for eight days and, as per the Hebrew calendar, starts on the 25th day of Kislev.

The word Chanukah means “dedication” or “induction” and the festival is celebrated with reverence by the Jewish community across the world with the lighting of the first candle of the Menorah – a nine-branched candelabra. And, according to tradition, an additional branch is lit every successive night, up until the final night of the ritual.