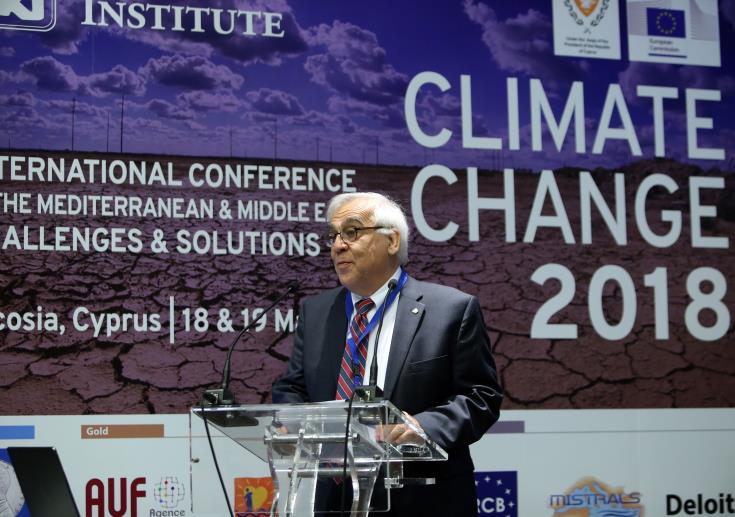 Cyprus, a country heavily affected by Climate Change, will face more intense heat waves, droughts and perhaps even new diseases, Professor Costas Papanikolas, President of the Cyprus Institute (CyI) has told CNA, stressing the importance of the International Conference on Climate Change, organised recently by CyI, as well as the primary regional role of the Institute.

In his interview with the Cyprus News Agency, Papanikolas said that Cyprus, being the only EU country in the Middle East, can and should undertake a primary coordinating, regional role in addressing the fallout from climate change, with the CyI being the core of this effort. Papanikolas said that this was the primary outcome of the International Conference on Climate Change.

He pointed out that the International Conference proposed a specific timetable for actions to be taken by the CyI the results of which will be presented at the United Nations Climate Change Special Session in the autumn of 2019.

Papanikolas told CNA that the wider Middle East and Eastern Mediterranean region is the world`s most vulnerable region to climate change and warned that climate change phenomena in Cyprus will increase in intensity and frequency.

The International Conference on “Climate Change in the Mediterranean and the Middle East: Challenges and Solutions” took place on 18-19 of May with the participation of 300 world scientists from 35 countries, including General Secretary of the World Meteorological Organisation, Former Prime Minister of France, Laurent Fabius who presided over the Paris Agreement and UN advisor, economist and director of the Earth Institute at Columbia University, Jeffrey Sachs.

With regard to the problems Cyprus is facing as a result of Climate Change, Papanikolas said that the first signs of the effects of climate change are already visible: extreme weather conditions (fires, floods, heat waves), increase in average temperature and reduction of rainfall.

“Unfortunately these phenomena will increase in intensity and frequency,” he warned.

In addition, the President of CyI told the CNA that “we should be ready to see an impact on our forests, prolonged drought and heat waves, possible visits by unwanted visitors on our shores (e.g. jellyfish) which may impact tourism, even perhaps diseases that have not been of concern to us in the past (eg West Nile virus).”

The importance of the Conference and the role of the CyI
————————

Pointing out that the magnitude and the impact of climate change is just beginning to be understood in detail in order to come up with plans to address them, Papanikolas told CNA that although the long-term measures to tackle the problem are widely known, namely the limitation of greenhouse gas emissions, nevertheless the plans to deal with individual impact, eg. on agriculture and livestock, tourism or immigration are not known.

He expressed the view that the outcome of the Conference will contribute in this direction, especially as regards the regional co-ordination for the implementation of actions.

Noting that the International Conference “was beyond our expectations”, he talked about the participation of more than 300 delegates from 35 countries, “like Laurent Fabius, Jeffrey Sachs, Petteri Taalas, Lassina Zerbo who all said that the wider region of the Middle East and the Eastern Mediterranean is the most volatile area on the planet. ”

“There is a great need to coordinate scientific activities and actions to deal with the repercussions of climate change in the future,” he said.

Referring to the role of Cyprus, he said that the primary conclusion of the Conference was that Cyprus, being the only EU country in the Middle East, can and should undertake a leading coordinating role and that the Cyprus Institute can be at the core of this effort.

He recalled that Professor Jeffrey Sachs, adviser to the UNSG on Climate Change, in his closing remarks at the Nicosia Conference proposed a specific timetable for actions to be undertaken by the CyI, the results of which are to be presented at the United Nations Climate Change Special Session in the autumn of 2019.

Papanikolas was invited to comment on a statement made to CNA by the General Secretary of the World Meteorological Organization, Petteri Taalas, that the CyI will have a role to play in the issue of climate change.

“The Cyprus Institute is recognised internationally as a regional centre of excellence on the study of climate change”, he said, adding that its work will be extended to the field of scientific co-operation and actions and policies to address their impact at a regional level.

He added that the CyI is already coordinating the actions of the global ‘Future Earth’ network for the Middle East and North Africa.

“The announcement, in the presence of the President of the Republic, of the establishment in Cyprus of a branch of the Sustainable Development Solutions Network (SDSN) to be co-ordinated by CyI is another step in this direction,” he concluded.

The International Conference on Climate Change was under the aegis of the President of the Republic of Cyprus, Nicos Anastasiades, with support from the Representation of the European Commission in Cyprus.

It addressed the scientific basis of Climate Change in the region and its impact and challenges on issues relating to health, water, food, tourism, and migration. Mitigation and adaptation strategies, policy challenges and governance were also discussed at the conference, with an overall goal of providing high-level propositions for mitigation/ adaptation strategies.

By Andreas Nicolaides
Previous articleTop ESA/NASA scientist: creating a society in Mars is the ultimate goal for humans
Next articleParents’ Associations: state pays €1 million for teachers free of teaching duties