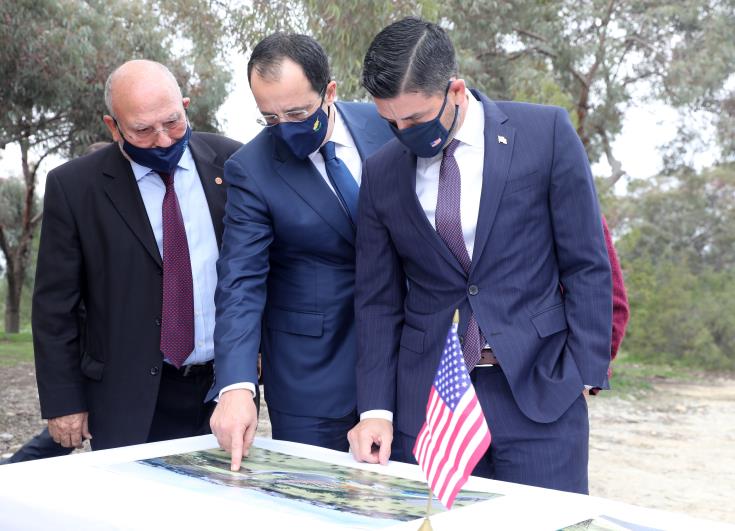 The ground-breaking ceremony of CYCLOPS, the Cyprus Center for Land, Open-Seas and Port Security took place on Monday in the presence of Cyprus FM Nicos Christodoulides and the acting United States Secretary of Homeland Security Chad Wolf.

Both Ministers spoke of the strong partnership between the two countries and the role of the Center for the region.

The United States will construct the facility which will cost  $5 million and provide equipment, trainers, and other capacity-building support, while the Republic of Cyprus will contribute land, facilitate travel, and provide trainers. Official construction is expected to begin February 2021.

Speaking during the ceremony, the US Minister said that the facility will be owned and operated by the Republic of Cyprus and will allow international partners to train in a dedicated facility with cutting edge equipment.

“Here, experts from the region will receive state of the art instruction in border security, customs and export controls, port and maritime security, and cybersecurity. A mobile cyber security training laboratory will allow regional partners to learn best practices to secure their critical infrastructure and engage in cross-border cyber investigations.  These training platforms will serve as a hub that works in close association with partner countries in the Mediterranean, the Middle East, and elsewhere”, he said.

Wolf added that he has seen this model work first hand as he was recently in Central America where the US have maintained a similar facility for well over a decade. He pointed out the role the US play in these kind of facilities, because of their diverse mission set, adding that “will certainly continue here in Cyprus”.

According to the US Embassy in Nicosia, CYCLOPS will allow the United States and their partners to provide enhanced technical assistance related to safety and security, including border security, customs and export controls, port and maritime security, and cybersecurity.

The five million dollar training facility will include a number of different hands-on training platforms, including a mock land border crossing, passenger screening area, and a mobile cyber security training laboratory, which will enable regional partners to learn best practices for securing critical infrastructure and to engage in cross border, counterproliferation cyber investigations.

CYCLOPS it is added, will support our efforts to curb the proliferation risks posed by malign regional actors and violent extremist organizations.

“The construction and ongoing support for CYCLOPS is a true partnership. The United States will construct the facility and provide equipment, trainers, and other capacity-building support, while the Republic of Cyprus will contribute land, facilitate travel, and provide trainers“, the US Embassy states.

A culmination of a joint effort, Cyprus FM says

FM Nicos Christodoulides in his remarks said that today`s ceremony marks the culmination of a joint effort that has become emblematic of the way in which bilateral cooperation between our two countries, Cyprus and the United States, has grown and deepened over the past few years.

“It is a positive occasion indeed, coming at the very beginning of a new year, and I very much hope that it will set the tone for things to come in 2021.The groundbreaking for the construction of CYCLOPS, a Training Facility that will serve Cyprus and the broader region, as well as our cooperation with the US, is an important development — one could even say a watershed — in a number of ways”, he said.

Cyprus FM pointed out that first and foremost, it is a prime example of the tangible results that the growing bilateral security relationship between the Republic of Cyprus and the United States is already yielding and a major accomplishment for both sides.

“I would therefore like to congratulate Ambassador Garber and her associates in Nicosia and in Washington, as well as our own dedicated team, for bringing this project to fruition. I wish to express our warm appreciation also to the Mayor and the Municipality of Larnaca for their support and cooperation, and especially for their assistance in securing this ideal plot of land”, he added.

Christodoulides underlined that today we are entering the final phase of the implementation of this innovative project, for which discussions started soon after the signing of the Statement of Intent on Security Cooperation between our two governments, in the fall of 2018. These discussions, he added, culminated in the signing of the Memorandum of Understanding for the establishment of CYCLOPS with the Secretary of State, Mike Pompeo, during his visit to Cyprus in September.

“Plans were drawn up swiftly after that, whilst at the same time the process was completed to secure the land. As a result of all these efforts, Chad and I stand here today breaking the ground for construction to begin.

If everything goes well, the premises will be completed within the year. I sincerely hope that by then, with the pandemic hopefully in check, we will be able to have an inauguration ceremony, perhaps also in the presence of more distinguished guests from the United States”, the Minister said.

He also added that in time, we have high hopes that CYCLOPS will develop into a hub of activity – at a domestic, regional and international level.

“We are already working with our American friends, to see how we can expand its activities, and within this framework we are already in discussions with the European Security and Defense College, an EU Institution, to see how we could develop synergies in relation to Counter-terrorism training activities”, he said.

According to FM, this would be a major development, adding that at the same time “we are putting together a “development team” for CYCLOPS, whose role will be to look into different areas of training that we could expand into”.

“For example, we are looking into the growing field of countering hybrid threats as a promising area for us, as well as at revisiting the countering-radicalization programs that have been developed as part of the Aqaba Process. Already, a few countries have informally indicated an interest in such cooperation”, he said.

By gavriella
Previous articleSupporters celebrate as judge rules against Assange’s extradition to U.S.
Next articleChecks to find spread of new strain of virus in Cyprus expected soon