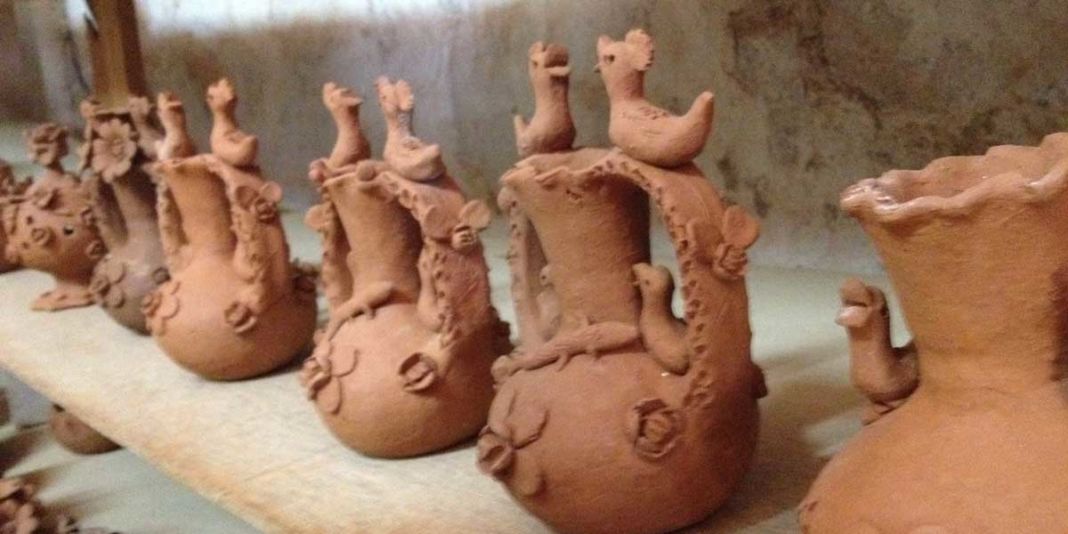 Pottery-making in Cyprus is an old craft, going as far as back as the Neolithic Age. The fame of the island’s pottery and pitharia (giant earthenware jars used in the past to store and transport wine, vinegar, oil or water), reached Europe as early as 1394.

Until the 1974 Turkish invasion, the heart of the island’s pottery industry were the villages of Fini, Kornos, Lapithos, Ayios Dimitrios, Kaminaria and the Famagusta area. Today, however, pottery-making is limited mainly to Kornos and Fini. The soils in the area of Fini have been dug up for centuries by the villagers, who produced pitharia on the spot before transporting them to other areas. Fini is also famous for its intricately sculptured small clay vases of a distinctive red hue. These are made by hand mostly by women without the help even of a potter’s wheel and are used mainly for decoration.

The village of Kornos has managed to preserve the tradition of pottery-making, for which it is known. The shape, size and type of pottery made are according to the use they will have. Besides pitharia, there are the kouzes (medium-sized water pots), satzia (big, open pots for frying) and others. Today, pottery making is preserved as a cottage industry.

The characteristics of the traditional pottery of Lapithos (in the occupied Keryneia area) are the coating known as badanas, the written sprinkled or engraved decoration and the colourless glazed coating. The refugee Keryneia potters have set up their workshops again in the free areas of Cyprus where they continue the tradition.

Traditional Famagusta pottery includes mainly white pots, fired in wood-fired kilns, used as decorative pots, water jugs, crocks, or moneyboxes. They were also exported to neighbouring countries. The anthropomorphic vessels of this area, which have their origins in antiquity, are of particular interest.

By In Cyprus
Previous article
Phyti weaving
Next article
Basketry