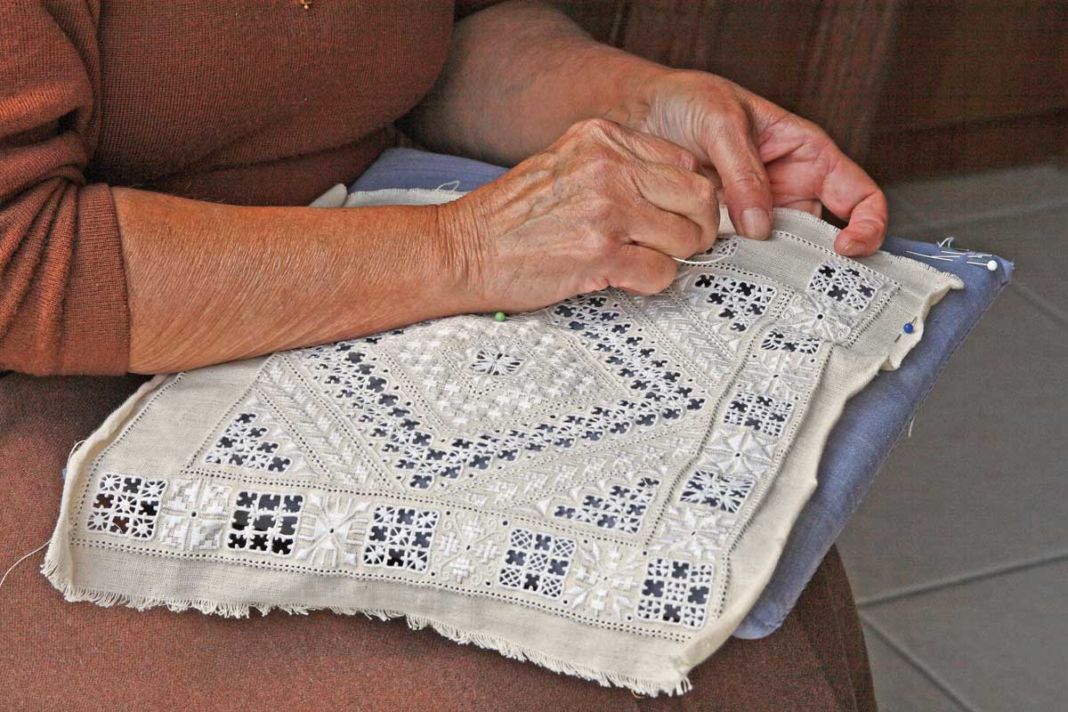 Lefkara lace, perhaps the best known Cypriot traditional embroidery, enjoys a worldwide reputation. It has evolved through the ages, having undergone changes brought about by the history of the island. By studying its technique, motifs, local names, raw materials and designs, one can find traces of the past which enable one to discover the history and identity of the island.

Lefkara lace derives its name from the village of Lefkara, where the most difficult and complex designs are made. Lefkara lace is also made in the villages of Kato Drys, Ora, Skarinou, Athienou and Kornos. Lefkaritika, as the lacework is known, originated from the local white embroidery called asproploumia, which women throughout Cyprus made as part of their dowry. The all-white embroidery consisted of geometric patterns in satin stitch, combined with simple drawn-thread-work. Then, in medieval times the village of Lefkara became the favourite summer resort of the ruling Venetian families. Venetian ladies took their own embroidery there to while away the long, hot summer hours, and their designs influenced those of the local women, whose descendants produce today’s lefkaritika.

Women do the needlework at home, and are often seen sitting in small groups, in doorways or courtyards, bent over their fine work. Patience and skill are very much required, as a single item may take months to complete.

Originally, the lace was embroidered on handmade cotton material, using cotton thread. This was later replaced by linen. Local silk production also permitted the introduction of silk lace material into the design.

Nowadays, Lefakara lace is made on linen material imported from various countries with mercerised cotton threads in white, natural colour of beige. The range of stitches and patterns of Lefkara embroidery is wide. Some derive from Venetian times, other motifs are pre-Venetian, still others are said to have been taken from the cave drawings of Ayios Neophytos, the twelfth-century Cypriot hermit.

Most designs have names describing objects from everyday life. For the satin stitch designs, there are names such as lanterns, crosses, forks, snails and daisies, and for the cut and drawn designs names, such as basket-like, eye-like and flea-like.

An important feature of the Lefkara lace is “the river”. This is a cut and drawn design with a zigzag shape. It runs parallel to the outside edges of the fabric. Its arches enclose triangular areas that are filled in with a variety of designs.

Also characteristic of the Lefkara lace are the designs made along the edges of the fabric. These are the tsimbi, closi, and tsimbocloso. A design which is no longer made is a kind of coarse lace, made by using the bobbin-lace technique common in Europe.

Lefkara lace is used mainly for tablecloths, napkins, tray-cloths and curtains. In the past it decorated the various parts of the four-poster bed, i.e., hangings, sheets, pillowcases, bedcovers and side and top curtains.

All these formed part of a girl’s dowry, which was necessary for her future life. It was a form of artistic expression for young women that proved their skill and talent. In addition, it was a challenge which often resulted in the creation of masterpieces of art and craftsmanship.