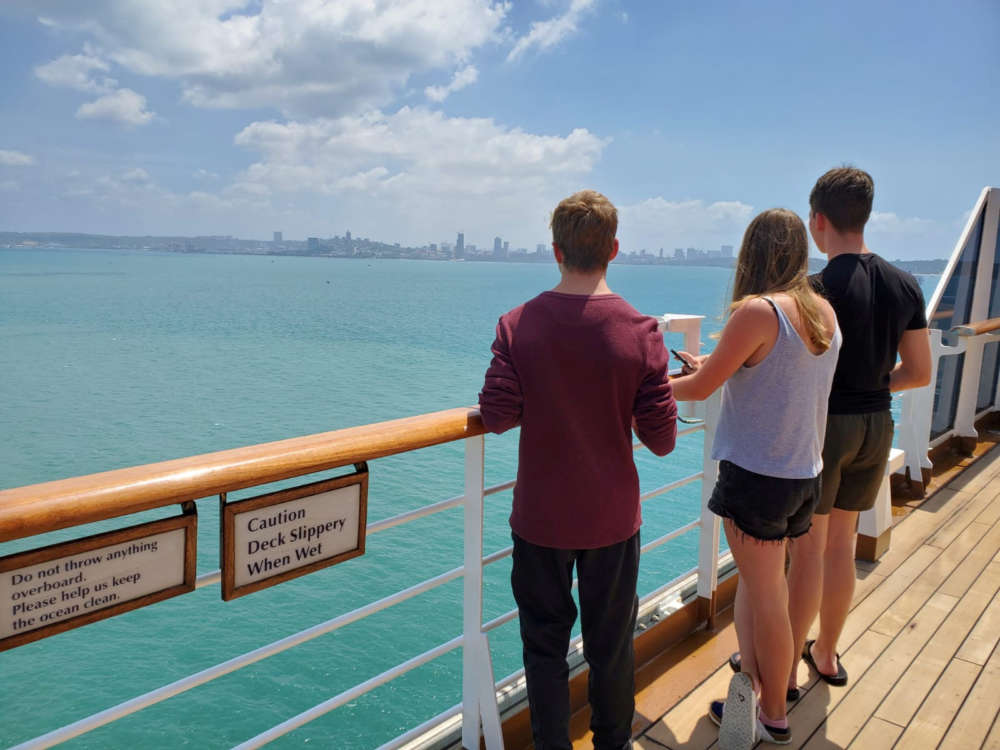 A cruise ship that spent two weeks at sea after being turned away by five countries over fears that someone aboard might have the coronavirus arrived in Cambodia on Thursday, to the relief of passengers and praise from global health officials.

The MS Westerdam, carrying 1,455 passengers and 802 crew, could be seen at an offshore anchoring point from the docks of the Cambodian port town of Sihanoukville early in the morning.

People at the docks prepared to welcome passengers with bouquets of flowers, as embassy officials and Cambodian health authorities waited alongside journalists.

“We’ve had so many near moments we thought we were going home only to be turned away,” Angela Jones, an American tourist on board, told Reuters in a text message.

Jones and her fellow passengers have spent almost two weeks at sea as several countries refused to let their ship dock.

“This morning, just seeing land was such a breathtaking moment,” said Jones. “I thought: Is this real?”

Passengers have had regular health checks during the troubled journey, said Holland America Line, the ship operator and a unit of Miami-based Carnival Corp.

Although no one has fallen ill aboard, the ship was turned away by Guam, Japan, the Philippines, Taiwan and Thailand over fears that someone on board could have the new flu-like virus that has killed more than 1,300 people, almost all in China.

To while away the time and break up the monotony of endless ocean scrolling past cabin windows, the ship’s crew organised dozens of activities, tourists on board told Reuters this week.

In a video address aboard the ship, Orlando Ashford, the president of Holland America Line, thanked passengers for their understanding in “incredibly unusual and challenging circumstances”.

“This has all been such a unique situation for any of us to be in, and you’ve been the most amazing guests through all of it,” said Ashford said in a copy of the video seen by Reuters.

“I’m sure you’ll have some good stories to tell when you reach your final destination home”.

The Westerdam would anchor outside Sihanoukville first to allow health checks by authorities, the ship’s captain, Vincent Smit, said in a letter to passengers.

Most would be able to disembark and begin their journey home via chartered flights from Phnom Penh, the Cambodian capital, from Friday at the earliest, he added.

“We are very pleased to have our final plan,” Smit said in a copy of the letter seen by Reuters.

Cambodian health officials boarded the ship soon after it anchored on Thursday, according to videos of the boarding seen by Reuters.

Later, a helicopter took off for Phnom Penh, carrying fluid samples from passengers for virus tests.

“This is an example of international solidarity we have been consistently calling for,” Tedros said ahead of the ship’s arrival. “Outbreaks can bring out the best and the worst in people.”

Stoking authorities’ fears in countries on the ship’s route has been the quarantine in Japan of the Diamond Princess cruise ship, also managed by a unit of Carnival Corp. Of the 3,700 on that vessel, 175 tested positive for the virus.

On Tuesday, the Westerdam tried to dock in Bangkok but was denied permission by Thai authorities. On Wednesday, a Thai Navy warship escorted it out of the Gulf of Thailand, and it set course for Cambodia, the Marine Traffic website showed.

The U.S. ambassador to Cambodia said he had sent a team to help U.S. citizens with disembarking and continuing their journeys, and was coordinating with embassies of other nations.

By In Cyprus
Previous articleLarnaca: Anti-narcotics police raid house, make one arrest
Next articleExemptions from filing a tax return