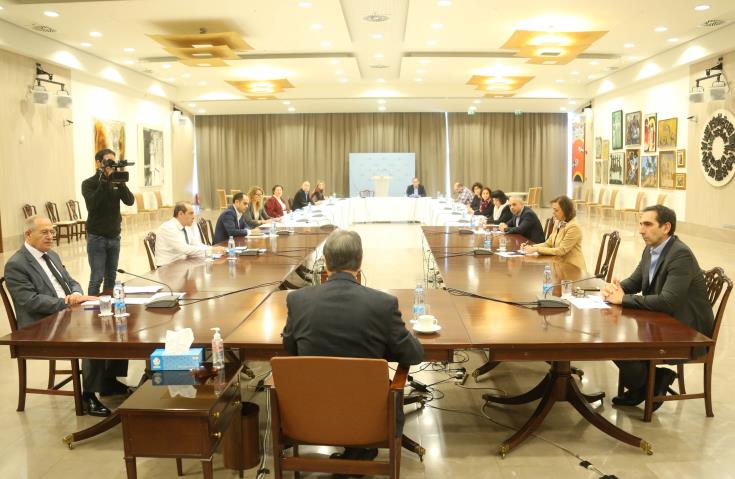 Everything is on the table tomorrow when the team of scientists advising the government on the coronavirus outbreak brief President Nicos Anastasiades on the epidemiological situation — days before the anticipated phase two of the  lockdown exit road map.

Experts say that based on the situation so far, there is no reason why Cyprus cannot move to stage two on May 21, as initially planned.

This includes the opening of schools, hair dressers and outdoor service at catering establishments and the scrapping on restrictions on movement — the 8998 text message system.

Government spokesman Kyriakos Koushios was on Thursday asked by CyBC TV about reports that the government was having second thoughts about opening the schools at all levels on May 21.

He said this was not the case. “I deny that. However, as the president has made clear, decisions will depend on the epidemiological situation. We will not undo what the people have achieved after so many sacrifices,” he said.

Meanwhile, speaking to CNA, member of the team of advisors — professor Petros Karayiannis said Friday’s meeting at the Presidential Palace will review the epidemiological situation so that the president is briefed on where we stand and whether additional relaxations can be implemented.

“We will talk about the schools, the airports, tourism, the cafeterias, the restaurants, hairdressers, football and everything covered in the next stages. Everything is on the table,” he said.

Asked what the committee will be proposing, he would only say that these were taken collectively.

“They sent us various documents on various issues to look at. We made our observations and will give our position at the meeting.”

Regarding the opening of the airports, he said a lot of work still remained to be done.

Decisions on the second phase of relaxation of the measures will be taken by the Council of Ministers in the next few days.

Citing sources, CNA said that the president will announce the second phase of the easing of the lockdown with a televised address.

The second phase from May 21 to June 8 covers:

— Hairdressing salons, barber shops and beauty centres will resume operation (from May 21)

– Catering business will resume operation only outdoors and in strict adherence to the protocols of the Ministries of Labour and Health (from May 21).

— Visit to parks, open space playgrounds, squares, marinas etc. will be permitted, provided no more than 10 persons are gathered at any time (from May 21)

— Church services and other forms of religious worship in churches, mosques and other places of worship are permitted, provided that protocols on hygiene, as determined by the Ministry of Health, are strictly adhered to (June 1).

— Museums, archaeological, and historical sites will reopen (from June 1).

– Operation and access to organised beaches will be permitted (from June 1).

By In Cyprus
Previous articleWhat is a virus ‘reproduction rate’?
Next articleEU starts legal actions against Luxembourg over money laundering, tax avoidance