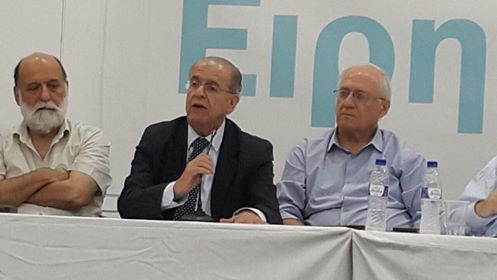 A cross-party initiative called “Apofasi Irinis” (decision for peace) was officially launched at a press conference in Nicosia on Wednesday aiming at informing public opinion, on both sides of the divided island, about a bizonal bicommunal federal solution.

Members of the group advocate strongly a political settlement, saying they are determined to work for peace, to the benefit of future generations. The group comprises prominent politicians from all spectrums of the political arena, including former foreign minister Ioannis Kasoulides, former Interior minister Andreas Christou, former attorney general Alecos Markides and former finance minister Kikis Kazamias.  Individuals not affiliated with any political party are also behind the new peace movement.

In a declaration read out at the press conference, the group expressed their support for a bizonal bicommunal federation, noted that the Gutteres framework could be a point of reference, called for constructive participation in negotiations, advocated cooperation with all political powers backing a federal solution and stressed the need for transparent and frank information of the political leadership and society at large about the course of Cyprus peace talks.

Addressing the conference, Kasoulides welcomed the array of politicians and local personalities from all walks of life participating in this initiative, stressing that the group is neither an initiative in opposition or a group wishing to exert pressure on the government.

Markides told the audience the group has established that there is no proper and correct information among the people about a bizonal bicommunal federal solution. He said it is necessary to connect with Greek Cypriots and Turkish Cypriots, on both sides of the divide, who share the same concerns and views.

Political activist Nicos Mesaritis, in his opening remarks, said a political solution is just the beginning, not the end of the road. He also stressed that the initiative is neither a political party nor a movement, nor do they intend to evolve into one. “Peace has to be secured now, we have taken the decision to work for peace,” he said.

Kazamias and Christou spoke along the same lines.

By Annie Charalambous
Previous articleBritish PM Johnson bids for election, as opponents seek to stop no-deal Brexit
Next articleNumber of registered unemployed down 16.7% in August