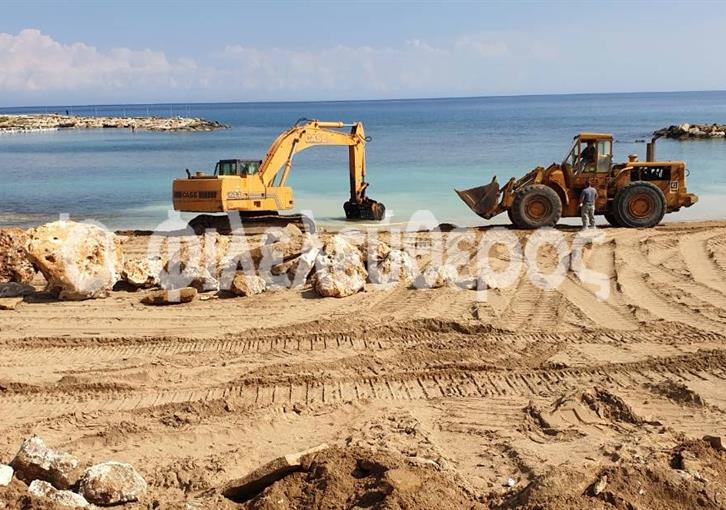 Heavy machinery is  back on Kalamies beach, this time with the blessing of the Famagusta district office, to repair damage caused by heavy rain and arbitrary interventions in the area, Phileleftheros reported on Wednesday.

It said that this winter’s heavy rain had rendered the beach unsuitable for swimmers, in part because of illegal interventions in the area in previous years.

Crews are removing the stones and rocks, many brought down by the streams after last December’s flooding, repairing part of the pathway which was destroyed and building an access ramp to the beach, the paper said.

Famagusta district officer Yiorgos Chrysafinis told the newspaper that the work was essential to repair damage caused by the storms, but also because of the illegal interventions there in the past by the municipality and private individuals.

“The work aims to create the conditions to ensure the safety of swimmers and others using the beach,” he said.

The district officer added that the Environment Service, the Public Works Department and the Fisheries Department were all aware of the work underway and their representatives had visited the area. He added that a district office beach protection official was monitoring the work with instructions to intervene if the need arises.

Crews are permitted to remove the stones and rocks from the beach, but machinery is not permitted to enter the sea. No permission has been given to remove rocks in the sea or to alter the coastline in any way, he added.

However crews can clear the beach of seaweed and loose stones, without affecting the area’s landscape.

Chysafinis said that after the destruction, officials had visited the area and found damage in areas where illegal interventions had taken place.

He added that unlike other years, the work by Paralimni Municipality is being carried out in consultation with the district office.

However, Philelefheros said a video it had obtained showed heavy equipment removing rocks from the coastal zone.

There have been a number of illegal interventions on beaches within the coastal protection zone by Paralimni Municipality in the past five years including at Kapparis, Fig Tree Bay, Ayia Triada, Serina Bay, Vrysouthkia, Green Bay and MMAD Beach, the paper added.