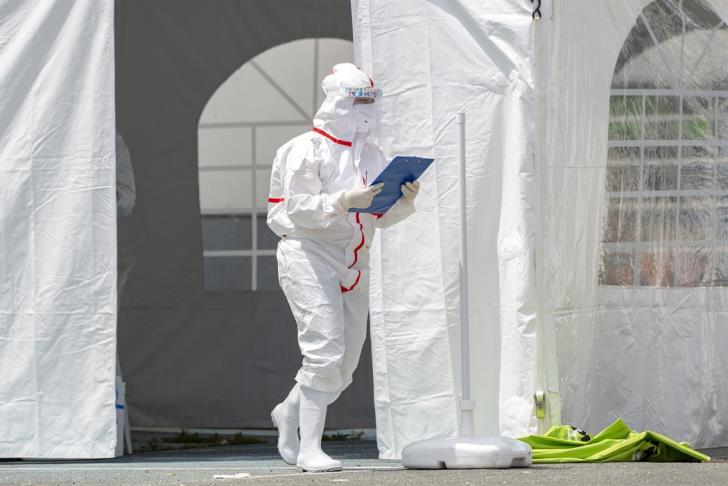 33 more tested positive to Covid-19 in Cyprus on Tuesday raising the total to 695 as concern mounts over the asymptomatic cases in the community. Cyprus also counts 12 deaths from the virus.

Two people were discharged from Famagusta referral hospital yesterday as fewer admissions have been recorded in hospitals, giving the health system a break.

Relief in Yeroskipou as 112 locals and workers at Yeroskipou Municipality test negative to the virus.

Meanwhile, mass testing of workers in the private and public sector continues as the Health Ministry publishes an updated list of labs authorised to do tests.

Headlines on Tuesday were dominated by news of 12 positive cases identified at a well-known bakery‘s Aradippou production facility and at a popular Nicosia branch of a supermarket chain.

Officials and experts weighed in on the news:

A top expert said there is no concern for the supermarket’s customers explaining why.

A health inspector from the MoH said that the virus cannot be transmitted through food.

The Labour Ministry processed 20,500 payments for the special childcare and the self-employed scheme on Tuesday, while payments to beneficiaries are ongoing.

8,000 students abroad received their €750 allowance so far with the application process remaining open until April 22.

Deputy Tourism Minister Savvas Perdios said that a 60% drop in tourist arrivals to Cyprus is the best-case scenario from the pandemic disruption as the state looks to its citizenship by investment scheme to boost finances.

Two departures and two arrivals are scheduled today at Larnaca Airport, flying home passengers to and from London and Athens.

British tourists in Turkish-held north Cyprus are being repatriated to the UK through Larnaca Airport.

Transport Minister Yiannis Karousos said on Tuesday that there is a target of repatriating about 2000 Cypriots and legal residents every two weeks.

Until yesterday, 400 people were quarantined in Cyprus’ hotels.

Four men are in police custody for resisting arrest and assaulting police officers who were booking them for breaking the lockdown.

21 people were fined for playing football yesterday, and two women were caught in violation of the lockdown while stealing potatoes.

Zygi community leader revoked a call on the faithful to effectively break the lockdown and go to church on the morning of Good Thursday and Good Saturday for Holy Communion.

And the Archbishop urged two Bishops accused of flouting decrees to support and not undermine measures to keep people home to contain the spread of the virus.