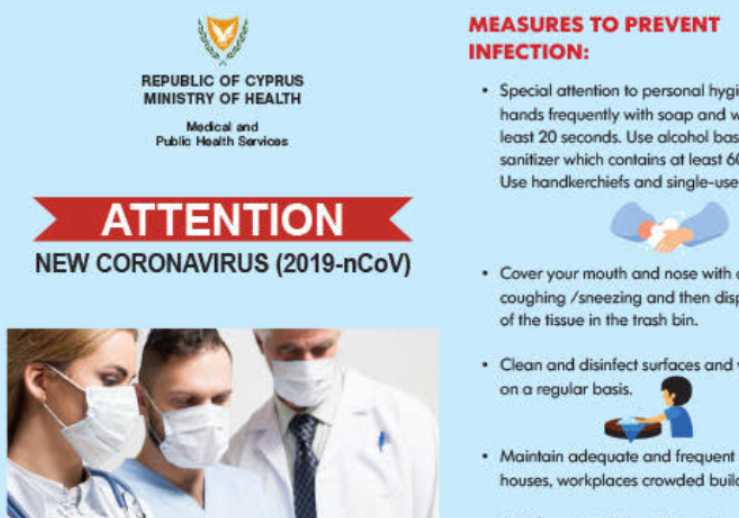 Cyprus late on Tuesday announced a two-week ban on flights from 28 countries, including Britain and Greece, to curb the coronavirus outbreak.

The measure will come into effect from 3 am on March 21 for a 14-day period, an official statement said. It does not affect cargo flights.

The island has already enacted stringent entry requirements, effective from March 16, barring anyone into the island, including Cypriots, without a medical certificate that they are clear of coronavirus.

Those who do arrive are placed in compulsory quarantine in a government-supervised facility for two weeks.

On Tuesday night, the minister announced some relaxations to the medical certificate requirement.

We reproduce below his statement, as released by the Press and Information Office:

Statements made by the Minister of Health after the meeting of the inter-ministerial committee presided by the President of the Republic, at the Presidential Palace

1) Flights from the following countries to the airports of Larnaca and Paphos will be banned as of 3a.m. 21 March 2020 for a period of 14 days (with the exception of cargo flights):

2) Paragraph 2(a) of the decree issued by the Minister of Health, dated 15 March 2020, in relation to the presentation of a medical examination certificate of coronavirus will still be in force until 3 a.m. 21 March 2020.

Individuals falling within the categories above, instead of possessing a health certificate, they have to possess a certificate issued by the diplomatic missions of Cyprus, which is going to be issued if those individuals present to the diplomatic missions of Cyprus the necessary documentation proving the reasons mentioned in categories 2(a) and 2(b) (e.g. departure tickets from Cyprus or doctor’s notes from the medical facilities they were treated by).

It is also added that flights to the Republic of Cyprus without passengers will be allowed for those wishing to leave the island.

The related decrees are going to be daily updated accordingly.

4) It is further added that all the individuals falling within the categories above entering the Republic of Cyprus will still need to go to a 14-day compulsory isolation (quarantine) in places indicated by the government with the exception of people staying abroad for health reasons. The latter are going to remain in self-isolation in order to carry on with their treatment uninterruptedly.