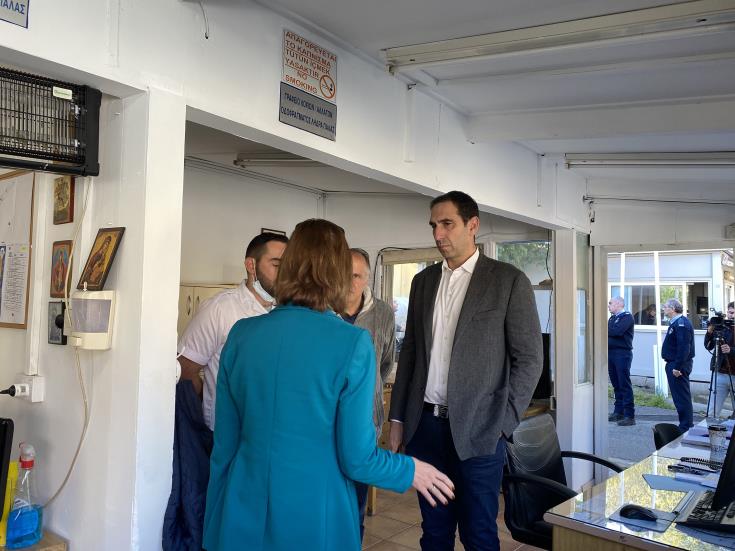 Health Minister Constantinos Ioannou on Saturday gave instructions for additional medical staff to be sent to the Ayios Dhometios checkpoint to cope with the increased traffic after the government closed four other checkpoints for a week as a precaution against an outbreak of coronovirus.

The minister visited the Ledra Palace checkpoint on Saturday to inspect the new measures in force.

He told reporters that even though that Ledra Palace checkpoint was relatively quiet there was increased traffic at Ayios Dhometios.

“We have identified the need for additional nursing staff at Ayios Dhometios and instructions have been given to increase personnel there,” he said.

On Friday, cabinet decided to suspend the operation of the checkpoints at Ledra Street, Dherynia, Astromeritis and Lefka effective from 6 am today, saying that this would allow personnel to focus on the remaining checkpoints where screening measures apply.

The government says the decision is temporary, will be reviewed on a daily basis and is not aimed at hampering contact between the two communities.

“The government did neither,” Akel said.

There has also been criticism from the Turkish Cypriot side.

Turkish Cypriot leader Mustafa Akinci has said that any decision should be taken by the bicommunal technical committee on health which was not consulted on the government’s decision.

NGO Unite Cyprus is planning a demonstration against the closure at Ledra Street at noon today. It says the excuse of the coronavirus was not just a “direct insult to our intelligence; it is a sinister attempt to test people’s reaction in case of blocking crossings.”

Asked about the criticism from the opposition, the minister said he did not want to discuss the political angle. “Purely for reasons of public health and to protect the public health of the two communities, of the entire island, we have decided to suspend the operation of these checkpoints temporarily,” he said.

The measure is in force for a week and depending on developments we will take the necessary decisions, he added and reiterated that the measure was implemented so so as to have better checks at the remaining checkpoints.

“There is no truth in any other connection or reference to the closing of the crossing points, apart from the preventative measures for the coronavirus,” he said

The United Nations peacekeeping force on the island, UNFICYP, said it had been informed of the decision.

“We call on both sides to continue their close cooperation in addressing any potential public health emergency and stand ready to assist both sides,” UNFICYP said in a statement.