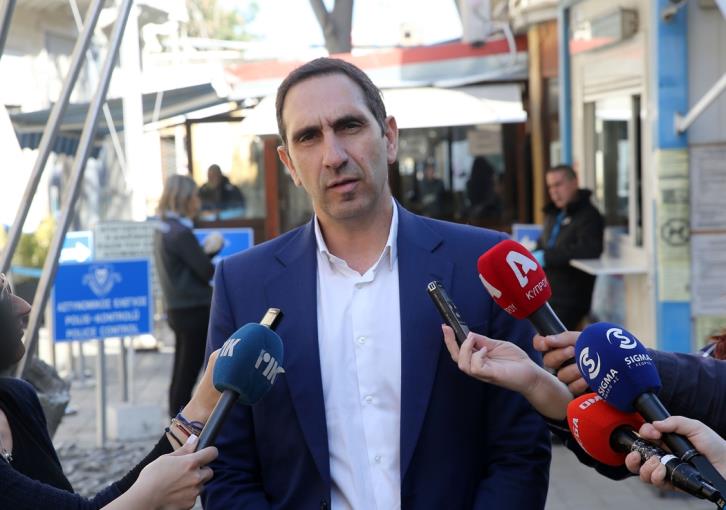 Health Minister Constantinos Ioannou visited Nicosia’s Ledra Street checkpoint on Wednesday to review implementation of measures against the coronavirus and told reporters he would raise with the Justice Minister the possibility of posting additional police officers there to cope with the extra checks being carried out.

Ioannou said that the head of the health services has already reviewed implementation of the measures three times since they were introduced, but thought it prudent he also pay an on the spot visit.

“The instructions are being implemented,” he said. However additional personnel was needed in some locations, such as at the Ledra Street checkpoint to process people coming into the government controlled areas as the checkpoint was a busy one.

“This is a suggestion I will be making at noon to my colleague the Justice Minister,” he said.

Asked whether police officers at the checkpoints had cited any other problems, he said that the issue of language had been raised. Even though the information leaflets had been issued in four languages the ministry will look into publishing them in other languages too, he said.

Asked whether there were gaps in the information being given by those crossing the checkpoints, Ioannou said that this also applied to the airports since travellers may be coming to Cyprus from third countries and fails to declare them.

“This is an issue of social responsibility. Police have informed us that stamps in passports are checked to confirm what is being stated. But this requires more time and this is where we may need additional personnel at the checkpoints which are busiest so that there is better evaluation,” he said.

Yesterday the ministry announced screening will be required for those coming from northern Italy, Japan, South Korea and Iran. Protocols are already in place for travellers from China.

A group of 12 high school pupils and their teachers who had gone to Milan as part of an Erasmus programme are due back later this afternoon and will be checked at the airport. If asymptomatic, they will be asked to self-isolate and the ministry has arranged a meeting with their parents for today to make this clear to them.

He rejected criticism that self-isolation was inadequate saying that Cyprus was in fact the first country to decide such a measure.

“It is not feasible to quarantine every passenger from Italy. It is not just the 12 pupils and we should not focus just on them as we have two flights from Italy every week as well as other passengers who come via other countries,” he said.

On objections from communities to a proposal to prepare a quarantine area for asymptomatic individuals who have come into contact with confirmed coronavirus cases, the minister said that there was no reason for concern.

Other countries have taken similar measures with the UK using a hotel at Heathrow and France two hotels in Provence.

“We are trying to find a location which is as isolated as possible. The same measures are being taken in other countries and there is no reason for concern.”

Cabinet is set to decide on two locations tomorrow and meetings will then be held in the area to brief the public. He said that irrespective of the location, he anticipated reaction.

“We need to understand that this is an issue of public health. If for example we do not go to Kannaviou and we go to Paphos, there will be a reaction there. The reaction stems from ignorance. When they are announced, the time of the open meetings will also be announced so as to answer all the queries.”