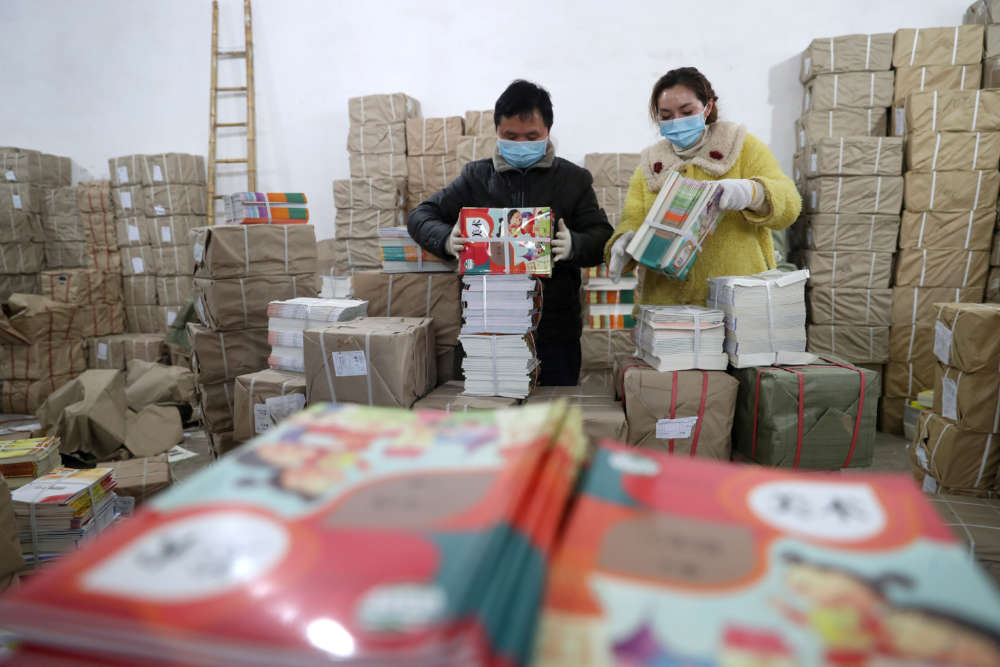 The number of new coronavirus cases in mainland China fell below 2,000 on Tuesday for the first time since January but the virus remains far from contained, as its economic impact spreads globally with South Korea announcing an economic emergency.

China’s lockdown of cities and tough restrictions on travel and movement have limited the spread of the virus outside the epicentre in Hubei province, but at great cost to the Chinese economy and global business.

Over two dozen trade fairs and industry conferences in China and overseas have been postponed due to travel curbs and concerns about the spread of the virus, potentially disrupting deals worth billions of dollars.

Apple Inc became the latest company to warn of trouble from the epidemic, saying it would not meet its guidance for March-quarter revenue because of slower iPhone production and weaker demand in China.

Singapore Airlines Ltd said it would temporarily cut flights across its global network in the three months to May, as the epidemic hits demand for services to the Asian city state, as well as through the key transit hub.

South Korea President Moon Jae-in said the economy was in an emergency situation and required stimulus as the epidemic had disrupted demand for South Korean goods.

Hong Kong increased government handouts to businesses and the Hospital Authority by $3.6 billion to ease the impact on the Chinese-ruled financial centre’s battered economy.

As global businesses sought to limit exposure to the virus, health authorities around the world searched for medical weapons.

The president of the EU Chamber of Commerce in China, Joerg Wuttke, said the world’s pharmacies may face a shortage of antibiotics and other drugs if the outbreak cannot be resolved soon, and accused Beijing of making supply-chain problems worse.

Chinese media reported on Friday that the capital is requiring a 14-day quarantine for all arrivals, which Wuttke said would make it difficult to fly in technical experts to help if facilities were down.

Japan announced plans to use HIV drugs to combat the virus as the growing number of cases poses an increasing threat to the world’s third-largest economy, as well as public health. Japan has the most cases, 520, outside of China.

With Japan’s economy contracting, raising the risk of a recession, the spread of the coronavirus has prompted Tokyo to put limits on public crowds while some companies have begun to urge employees to work from home.

The rapidly spreading virus claimed another 98 lives in mainland China as of Feb. 17, bringing the total death toll there to 1,868, the National Health Commission said. There were 1,886 new confirmed infections for a total of 72,436.

The number of new daily infections in mainland China had not been below 2,000 since Jan. 30, while the daily death toll had not come under 100 since Feb. 11.

Outside of China, there are 827 cases in 26 countries and regions and five deaths, according to a Reuters count based on official statements.

The head of a leading hospital in China’s central city of Wuhan, the epicentre of a coronavirus outbreak, died of the disease on Tuesday, state television said. Liu Zhiming, the director of Wuhan Wuchang Hospital, died at 10:30 a.m.

As of Feb. 11, a total of 1,716 health workers had become infected with the virus and five have died, according to the Chinese Centre for Disease Control and Prevention.

Chinese authorities say the stabilisation in the number of new cases is a sign that measures they have taken to halt the spread of the disease are having an effect.

“We can hope that the reports of falling numbers of new cases in China does show that the epidemic has peaked in Hubei province, but it is still too early to be sure that this is so,” he said.

More than 300 American cruise liner passengers, including 14 who tested positive for coronavirus, were flown to military bases in the United States, after two weeks under quarantine off Japan. Britain’s Foreign Office said it was working to organise a flight to Japan to evacuate its nationals from the ship.

Around half of all known cases of the virus outside China have been found aboard the Diamond Princess in Yokohama, where around 400 people have tested positive since the cruise liner was ordered to stay under quarantine off Japan on Feb. 3.

Authorities around the world were also trying to track down passengers from another Carnival Corp-owned cruise liner, the Westerdam, which was turned away from ports across Southeast Asia before docking in Cambodia on Thursday.

One American passenger who disembarked in Cambodia tested positive for the virus in Malaysia on Saturday, but the company said none of the other 1,454 passengers and 802 crew had reported symptoms.

With many Chinese factories still closed and others struggling to come back online after extended Chinese New Years holidays, the world’s second largest economy is suffering.

The head of China’s state assets regulator said the coronavirus would have a “major impact” on industries in February, suggesting the worst may still be to come in terms of business activity.

Apple said it manufacturing facilities in China had begun to reopen but were ramping up more slowly than expected, and the resulting iPhone shortages would hit sales.

China is the world’s biggest market for smartphones and some analysts have estimated that the virus may slash demand for handsets by half in the first quarter in China.

South Korean rival Samsung Electronics has launched smartphone delivery services for customers to test its new products, as the coronavirus forced it to cancel promotional events and brace for weak store sales.