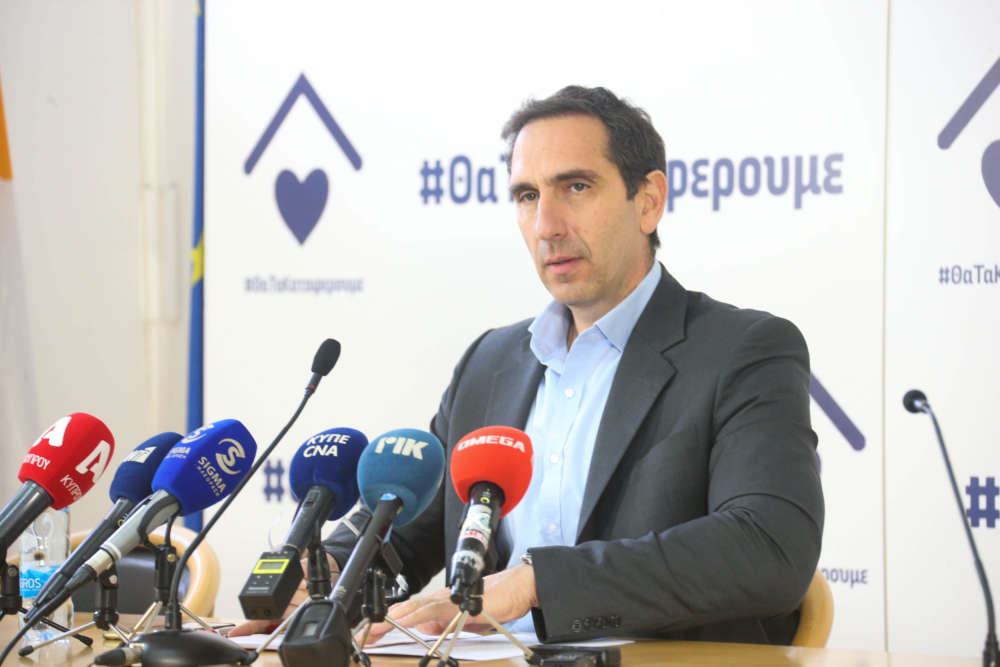 Health Minister Constantinos Ioannou said on Friday that all efforts are focused on averting a mass outbreak of coronavirus in Cyprus so that the health system can cope.

“No country has unlimited hospital beds to treat a large percentage of the population at the same time, and Cyprus is no exception,”  he said at a press conference to inform the public about the Covid-19 outbreak and the measures being taken here.

But he assured that the health system has both the equipment and the trained medical professionals needed. And he again urged the public to comply with the instructions and advice so as to contain the virus.

“I assure that Cyprus’ health system has the necessary equipment and the appropriate trained professionals,” he said.

“For coronavirus patients we have made available 126 intensive care units, six at Famagusta Hospital 112 in Nicosia, and eight in Limassol,” he said adding that Cyprus has secured an additional number of ventilators.

There are currently 67 confirmed Covid-19 cases in Cyprus. Two are in intensive care at Limasssol, 12 others have been admitted with mild symptoms to Famagusta Hospital — which is the referral hospital for coronavirus and two others have been discharged.

“There are adequate pharmaceuticals and consumable items but I urge everyone to use them sparingly because even though we have stocks, demand is high internationally and supplies are limited,” he said.

What cannot be avoided is that some health professionals may contract the virus and unfortunately this has occurred, requiring protocols to be activated and depriving the system of much needed human resources and facilities.

But the health of health professionals is paramount and the ministry announced new measures today aiming at protecting those in the front line and shoring up the health system.

Moreover, the ministry is also drawing on  100 million euro in extra funds.

Decrees placing all registered doctors and nurses and private hospital beds under the instructions of the minister will ease the pressure on the public health system.

Ioannou said authorities anticipate that the number of confirmed cases would rise, saying that this was partly because Cyprus after Italy had the second largest rate of tests.

Only yesterday, 400 tests were carried out while efforts are underway to secure equipment from the US that can carry 1000 tests a day.

Cyprus had implemented tougher rules than recommended by WHO and the ECDC but it was essential for the public to take precautions.

“The next few days will be particularly decisive in determining the outcome of this effort and it would be unfair to destroy what we have achieved these days. Stay home. It’s simple.”

And he added: “Please stay home. We want to create a shield of protection particularly for the elderly and vulnerable because they are the first to be at risk from the virus.”

The minister also had a message for students and others who have remained abroad and their parents, saying he shared their concern and accepted any criticism they want to levy against him. The situation was particularly difficult and mistakes have been made.

But as Minister of Health he had responsibility to do the best he could, based on the advice of experts, to protect public health.

“I accept their criticism and share their pain. But the first aim of the country is to avert the spread of the virus and to protect public health. The measures we have taken the past weeks are tougher than elsewhere. I prefer to take painful decisions even if they appear  excessive than to leave people unprotected. We apologise that people are being inconvenienced. The choice is between life and death. We have an obligation to offer protection to the citizens of this country,” he said.

Especially for citizens of the Republic of Cyprus who are abroad the ministry is in constant touch with the Foreign Ministry which through diplomatic missions has a channel of communication with Cypriots across the world.

“Whoever has a serious health problem will not not be abandoned by the Republic. You must be certain of that,” he assured.

And he added: “We are in an emergency situation. People must obey our instructions. We have asked companies to close and people to restrict their movements. Unfortunately some people are not complying. Even those in quarantine. We have put soldiers and security staff but we can’t have someone outside every room. People must comply, otherwise we will have to take more drastic measures.

The minister thanked health professionals and he urged the public not to listen to rumours which only cause more concern.