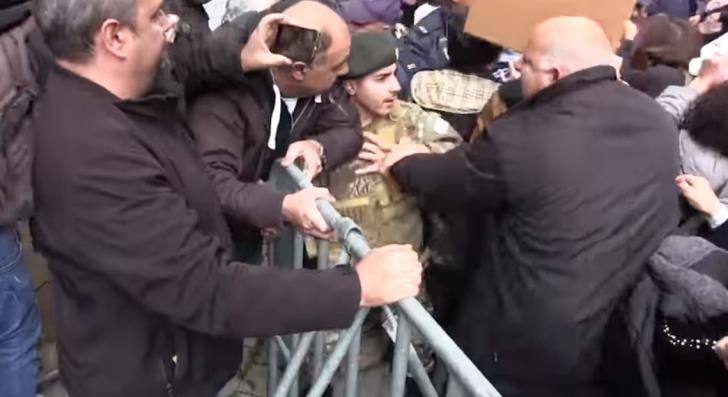 A 55 year old man caught on video appearing to assault a young national guard soldier during protests over the closure of Ledra Street checkpoint on Saturday has been arrested.

Police said the man had given a written statement in connection with the incident. He was then re-arrested for unlawful assembly and causing a disturbance.

The suspect was among scores of demonstrators protesting the government’s decision to temporarily suspend operation of four checkpoints as part of measures to prevent the spread of coronavirus.

They managed to break through the barricades erected at the checkpoint and enter the buffer zone where they were joined by Turkish Cypriots demanding the government reverse the decision they said was hampering free movement.

No incidents of the virus have been reported on either side of the Green Line. But the government said the measures were necessary to free resources so that screening can be carried out at the other checkpoints.

With four checkpoints closed as from yesterday — the start of a long weekend — long lines of cars built up at the main checkpoint in Ayios Dhometios, leading to long waits.

Turkish Cypriot leader Mustafa Akinci joined the critics, saying the measure “had nothing to do with the coronavirus”.

In a post on Facebook, Akinci wrote:  “Have just witnessed the chaotic situation at the Kermia- Ay Dometios Checkpoint. Hundreds of cars had been waiting for hours for the only two GC police officers to check their ID’s, as a measure which has been introduced today and definitely has nothing to do with the coronavirus. Lots of people are protesting, some were leaving their cars in order to be able to cross on foot. As I have already conveyed to Mr. Anastasiades, we need to tackle the problem on scientific basis; but the decision of the GC leadership unfortunately lacks that and is in the direction of separating the two communities more, rather than uniting them.”