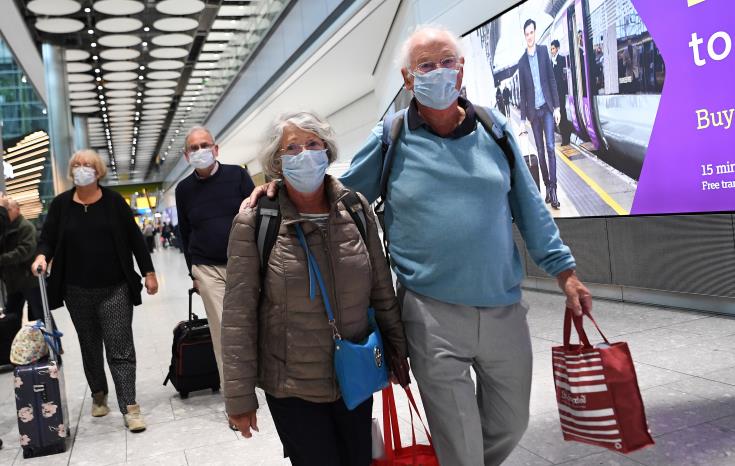 626 foreign visitors to Cyprus, many from the UK, have been repatriated through Paphos airport so far today, the CNA reported on Thursday citing sources.

The passengers, who were reportedly tourists that were on holiday, departed on seven flights, some of them chartered especially to transport people home and arrived at Paphos airport without passengers.

In particular, 514 of the passengers were flown to London’s Stansted and Luton airports, Edinburgh and Tallinn, Estonia. The remaining 112 departed for Malta.

Meanwhile, around 4 pm a flight from Thessaloniki landed in Paphos carrying 37 passengers, and another flight is expected from Stansted airport carrying 49 passengers.

The arrival flights include British and Russian nationals who are permanent Cyprus residents as well as students.

Another flight from Malta landed at Paphos airport around 11 am carrying three people, one of whom reportedly had a fever and would undergo medical examination. The other two were quarantined for 14 days as per the protocol.

Five flights landed at Larnaca airport by 4 pm, the CNA reports; one from Athens with 119 passengers, one from Cairo with 23, one from Amsterdam with 47, from Moscow with 53 and Frankfurt with 31.

Passengers who were permitted to disembark the plane were taken by bus to locations designated by the government to be quarantined for 14 days.

Another eight arrivals — including a flight from Stansted with 49 passengers around 7 pm — and eight departures are scheduled by midnight at Paphos airport.

Shortly before 7 pm a flight from Sofia with 97 passengers is expected at Larnaca airport.

Once an aircraft lands at Larnaca and Paphos airports, members of the police and officers from the Ministries of Health and Transport board the plane to gather the required certificates from passengers. These are checked at “Zenon” centre before permission is granted to disembark.

By Josephine Koumettou
Previous articlePublic figures who have tested positive for coronavirus
Next articleCoronavirus: Another nine test positive, brings total to 67