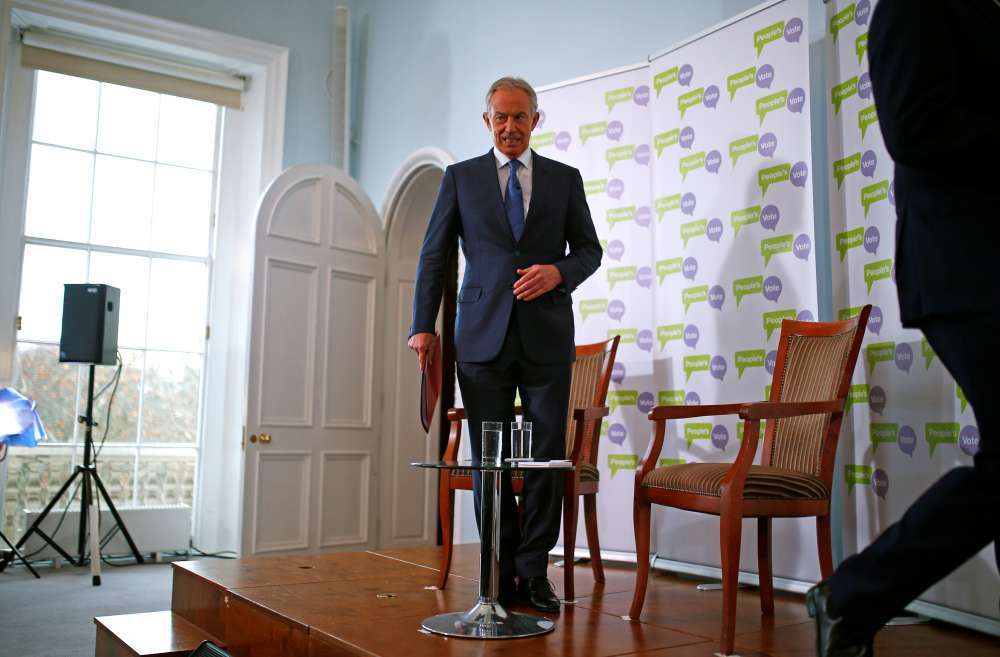 He said Labour could recover ground from the Scottish arm of Prime Minister Theresa May’s Conservatives, led by Ruth Davidson, by offering a second vote and a way out for Scots, most of whom oppose Britain’s planned exit from the European Union. Nationally, Britons voted by a 52-48 percent margin in 2016 in favour of Brexit.

“The vulnerability of Ruth Davidson’s Conservatives is that they are tied to Theresa May. That is a vulnerability, but it’s only a vulnerability you can exploit if you’re prepared to say, ‘We’d stop the thing’,” Blair, premier for a decade to 2007, told Holyrood Magazine in an interview published on Friday.

“So, you’ve literally got those votes just lying on the table waiting to be taken, you just need to say it,” said Blair, a centre-left Europhile who backs a second referendum on Brexit.

With just five weeks until Britain is due to leave the EU on March 29, May is yet to get the changes to her exit deal with Brussels she needs to secure its ratification in parliament.

She has ruled out a second referendum, saying that would negate “the will of the British people” expressed in 2016.

Ahead of a promised parliamentary debate and vote on the next steps on Brexit on Feb. 27, Corbyn is under intense pressure from moderates within his party to back a second referendum explicitly, now that the terms of Brexit are known.

Corbyn, a longtime eurosceptic, has said Labour is focusing on securing an early national election before any possible resort to a second referendum.

Nine of his lawmakers have resigned this week, with most supporting a second referendum. British media have reported dozens more could follow if Corbyn does not back a plan to put May’s Brexit withdrawal deal to a public vote.

Some of those defectors have teamed up with some pro-EU Conservative lawmakers who are also pushing for a second referendum, a further sign of the fragmentation of British politics wrought by the decision to leave the EU.

Labour has seven of Scotland’s 59 seats in Britain’s 650-seat parliament, having fallen to a low of just one seat in the 2015 election. But its position is still weak for a party that for decades dominated Scottish politics and had 41 seats in 2005.

To be voted back into power in Britain, Labour would probably have to recover a significant number of seats in Scotland, which is traditionally more left-leaning but is now dominated by the Scottish National Party.

The next national election is not due until 2022.

By In Cyprus
Previous articleCyprus talks must continue on the basis of UNSC resolutions, Lavrov says
Next articleProtaras pub and restaurant gutted by fire, hotel damaged