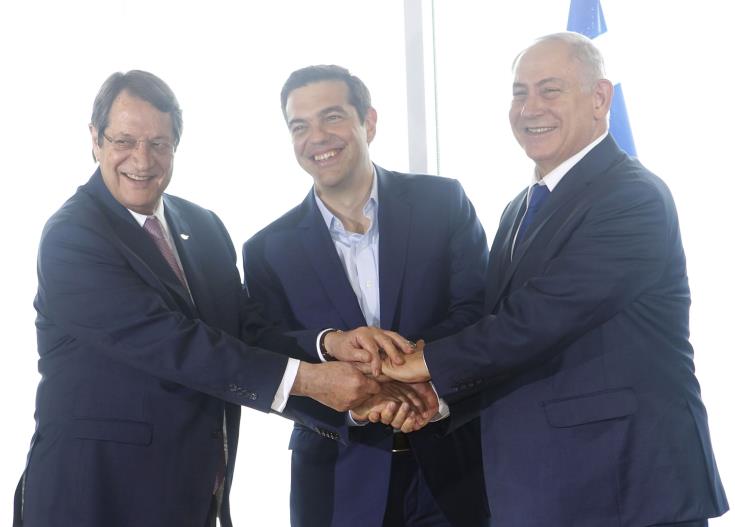 Cooperation is essential for the exploitation and development of joint gas reserves, says Shmuel (Sammy) Revel, the Ambassador of Israel to Cyprus, noting at the same time that the two countries have a transparent and productive dialogue over block 12 reserves.

In an interview with Cyprus News Agency, ahead of tomorrow’s trilateral Cyprus-Greece-Israel Summit in Nicosia, the Ambassador also notes that he expects progress to be made with regard to the EastMed pipeline and reiterates his country’s respect for Cyprus’ rights in its various maritime zones.

Prime Minister Benjamin Netanyahu will be accompanied by several Ministers and high-level officials during the Trilateral Summit in the Cypriot capital. Topics on the agenda include energy, trade and investments, telecommunications and the prevention of the maritime pollution. Ambassador Revel says that a number of bilateral and trilateral agreements are expected to be signed, enhancing ongoing cooperation in specific areas.

The two countries don’t see eye to eye on the issue of potential cross-border quantities when it comes to “Aphrodite”, the gas filed that lies in Cyprus’ exclusive economic zone block 12 bordering the Israeli exclusive economic zone (EEZ). The Israeli company that has rights to neighbouring “Yishai” field believes that the exploitation of “Aphrodite” will also take away gas belonging to Israel. Cypriot Energy Minister George Lakkotrypis stated recently that Cyprus and Israel have agreed to proceed to arbitration, if no settlement is reached between the companies claiming rights to “Aphrodite”.

“We have a very transparent and productive dialogue with the government of Cyprus and I am convinced that this will lead to positive results,” Ambassador Revel tells CNA, when asked to comment on this issue, while pointing to the 2010 agreement, Israel and Cyprus reached, in order to delimitate their EEZ.

“We believe that cooperation is essential for the exploitation and development of our joint gas reserves,” he underlines.

Asked about other energy projects, Revel highlights the EastMed pipeline, aiming to link resources in the Levantine basin with Europe. “Our countries are promoting the EastMed pipeline, taking into consideration both the economic and technical aspects of this ambitious project. The Ministers of Energy will participate in the coming Trilateral Summit and we hope to see progress on this issue soon,” he adds.

He also says that the ongoing dialogue between Israel, Cyprus, Greece, Italy, other countries and the EU, aims to find the best solutions for natural gas exports, within the region and towards Europe.

The Ambassador was also asked to comment on Turkey’s actions in the exclusive economic zone of the Republic of Cyprus, in particular with regard to an incident in block 3, last February. “Following the visit of Foreign Minister, Nikos Christodoulides, to Israel in March we stated clearly that we respect the rights of Cyprus in its various maritime zones. The signing of the bilateral agreement between Israel and Cyprus back in 2010, on the delimitation of the EEZ, speaks for itself” he says.

In February, Turkish warships blocked twice a vessel bound for drilling activities in Cyprus’ EEZ block 3, which had been commissioned by the Italian energy company ENI. Last month, ENI CEO Claudio Descalzi paid a visit to Nicosia and said the company would not give up on its rights in block 3 and would repeat its efforts.

Cyprus and Israel are “natural partners”

Asked to define the relationship between Israel and Cyprus, the Ambassador says that “it is not only about definitions, but also about concrete content.” Apart from their geographic proximity, Revel says the two countries also share common values, such as democracy and tolerance, peace and understanding, which “makes Cyprus and Israel also natural partners”.

He adds that during the past few years, Israel and Cyprus have developed a strong strategic partnership. “We aim to further widen and deepen our partnership for the benefit of our people and for the security, stability and prosperity of the region” he says.

The Ambassador also notes that the next Trilateral Summit between Israel, Cyprus and Greece is the 4th meeting between heads of states taking place in the past two years, while more meetings took place at ministerial level in key areas such as security, counter-terrorism, health, water, environment.

The various meetings “solidify the relations and translate the political will into concrete actions” he says, noting that people-to-people relations are also important, including those between the respective diaspora communities.

“As we are facing common challenges in the region, due to rising extremism and terrorism, we must work closely together to set up a framework which will provide security, safety and prosperity. The focus of the coming Summit is to build stronger bridges between the people and to take our longstanding partnership to a new level,” he concludes.

The Embassy of Israel, under the auspices of Cyprus` Minister of Foreign Affairs, will host in the coming weeks in Cyprus, Saul Singer, journalist and co-author of the best-selling book “Start-Up Nation: The Story of Israel’s Economic Miracle”. As Ambassador Revel says, the aim is to create a framework for a far-reaching cooperation in this field, which will have an important impact on economic growth and will inspire the future generation.

By In Cyprus
Previous articleCyprus Airways inaugural flights from Larnaca to Munich and Stuttgart
Next articleCyprus and Greece FMs meet in Nicosia to discuss Cyprus issue, EU-Turkey relations