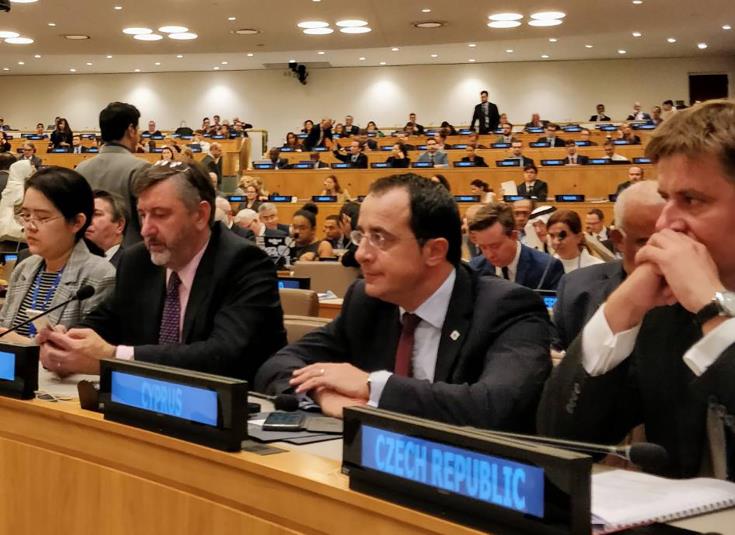 Deliberations have been underway since the beginning of August to arrange bilateral and trilateral meetings for Foreign Minister Nicos Christodoulides in New York with his counterparts from other countries on the sidelines of the UN General Assembly session during the last week of September.

Christodoulides will be accompanying President, Nicos Anastasiades at the UN General Assembly session.

CNA has learned that Christodoulides will meet mainly with officials from countries of the Middle East, North Africa and the Gulf, as the first basic pillar of Cyprus’ foreign policy concerns the development of relations with countries from these regions, while meetings may also take place with officials of UN Security Council permanent member states.

The sources that spoke to the Agency also recalled the trilateral cooperation schemes which Cyprus and Greece have established with countries in the region and that this will be the first time that the new Greek government will be attending a UN General Assembly session. Greek Prime Minister Kyriakos Mitsotakis, who will be accompanied among others by Foreign Minister Nikos Dendias, will be in New York on September 23 for the UN General Assembly and for a series of meetings with officials.

The Cypriot delegation is expected to arrive to New York on September 22 and return to Cyprus on September 29. However, there may be a change to the date of its departure from New York if a meeting of the UN Secretary General Antonio Guterres with President Anastasiades and Turkish Cypriot leader Mustafa Akinci is arranged.

CNA has learned that President Anastasiades will also be accompanied, among others, in New York by Agriculture, Rural Development and Environment Minister Costas Kadis, as Guterres will be hosting the 2019 Climate Action Summit on September 23

Kadis had presented during the UN Abu Dhabi Climate Meeting, which took place between June 30 and July 1, President Nicos Anastasiades’ initiative to establish a regional action plan to coordinate countries of the Eastern Mediterranean and the Middle East in climate change issues.

By In Cyprus
Previous articleJohnson tells Germany and France: do a Brexit deal
Next articleBiker killed in new road collision