Concert for flute and piano 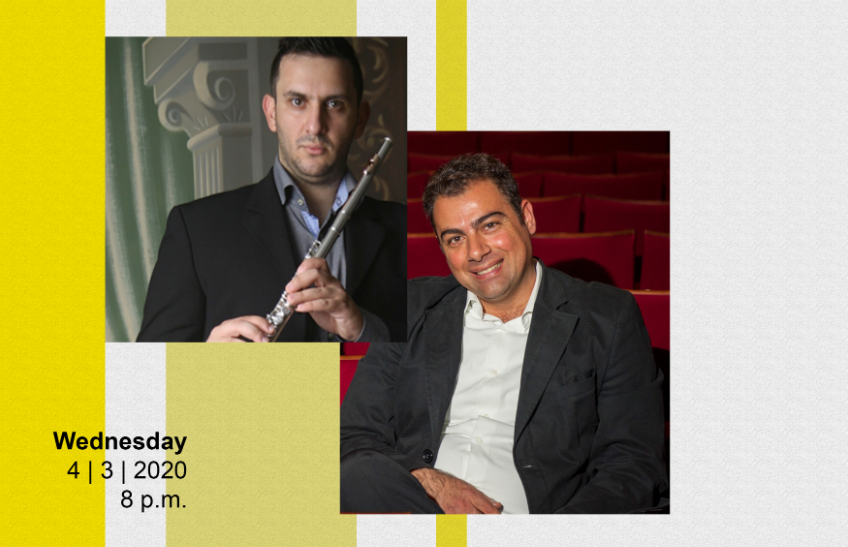 Savvas Christodoulou (flute) and Manolis Neophytou (piano) meet for the first time, on Technopolis 20 stage. The two talented Cypriot musicians gave us in the past, individually, pleasant moments with great concerts and they promise to surprise and satisfy us one more time.

The concert will take place on Wednesday, 4th of March 2010, at 8pm and the programme will include amongst others, great works such as Arpeggione by F. Schubert and Concertino by C. Chaminade and additionally, works by S. Rachmaninov, P.Ι. Tchaikovsky, J. Ibert, F Chopin.

Α preconcert will precede with young students at 7:30pm, a small concert series that aim to present young music talents, an idea of professors of the Paphos Music Schools.

Savvas Christodoulou was born in Limassol where he began his musical studies at a young age. In 2005 he moved to Prague to study flute performance in the Prague National Conservatory from where he graduated in 2010. In the same year he was accepted in Utrecht Conservatory to study with world famous flute soloist Aldo Baerten. He obtained his bachelor’s degree on flute performance and education with honors in 2012. In addition, he studied piccolo with Gudrun Bourel and Baroque performance with Mr. Wilbert Hazelzet. In 2015 he obtained his master’s degree in flute performance on stages. He participated in several Masterclasses worldwide with famous flutists such as Sir James Galway, E. Pahud, W. Bennett, P.L Graf, M. Bellavance, S. Milan, D. Bouriakov etc. He was a member of the Symphony orchestra of Prague Conservatoire and Utrecht as well. He appears regularly in flute recitals and chamber music concerts in The Netherlands, Belgium, Czech Republic, Greece and Cyprus. Currently he is a guest member of Cyprus Symphony Orchestra and the founder of Quintus Wind Quintet. He appears regularly with Commandaria Orhcestra (Cyprus) and he enjoys a performing career as a soloist and chamber musician.

Manolis Neophytou holds a Bachelor of Music (Honours) Degree in Performance from the Moscow State Tchaikovsky Conservatoire, where he studied with Prof. Irina Plotnikova and Prof. Arkadii Sevidov, with a scholarship from Nicolas Economou Foundation. He also studied in Ecole Normale in Paris with a scholarship from the Albert Russel Foundation. He has obtained his Masters in Piano Performance from the University of London with a scholarship from the State Scholarships Foundation of Greece (I.K.Y.). Manolis represented Cyprus at the Eurovision Classical Contests in Brussels (1992), Warsaw (1994) and Lisbon (1996) after winning the Cyprus National Competitions for young musicians. He has received prizes in several piano competitions: the Fourth Prize at Senegallia International Piano Competition (Italy, 1994), the First Prize at the Inter-Mediterranean Music Festival (Palermo, Italy, 1995) and the Second Prize at the Giorgos Thimis Piano Competition (Megaron Mousikis of Thessaloniki, Greece, 2002). His performance activities include solo recitals and concerts in Greece, Russia, Poland, Italy, France, Ireland, U.K., Korea, South Africa and Cyprus. He is currently teaching piano at the Music Lyceum in Limassol and the European University of Cyprus.

Zara launches online sales in Cyprus today. With this launch, Zara is marking a new milestone in the steady expansion of its fully integrated...
Read more
Whats On

***The 22nd Logicom Cyprus Marathon initially scheduled for March 15 has been cancelled due to the latest Coronavirus measures announced by the council of...
Read more
Whats On

***The opening of the exhibition "Rebirth" initially scheduled for March 14 has been postponed until further notice due to the latest Coronavirus measures announced...
Read more
Outdoor Adventures

Cyprus is a paradise for those who love nature and walking. The Deputy Ministry of Tourism and the Forestry Department are organising the Walking...
Read more