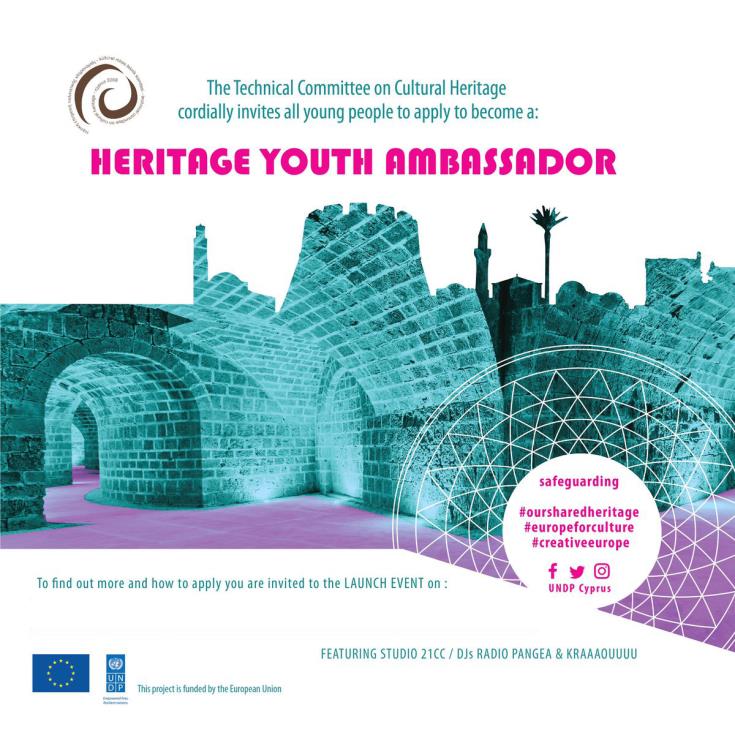 The bicommunal  Technical Committee on Cultural Heritage (TCCH) is seeking to mobilise young people on Instagram to lead efforts to promote and preserve the rich and diverse cultural heritage in Cyprus.

Forty young Greek Cypriots and Turkish Cypriots will be chosen to act as Heritage Youth Ambassadors in order to embrace the values of solidarity, respect for human dignity and human rights, equality, tolerance, non-discrimination and justice and respect for culture and traditions.

The Committee is calling upon young Cypriots to post on Instagram one to three pictures or a 30 second video of sites of cultural heritage all over the island and write why culture is important to them. They should use the hashtags #oursharedheritage #EuropeforCulture #TCCHYouthAmbassador. The application deadline is June 30.

The shortlisted selected candidates will be invited for an interview by July 15 and following the interviews the final Heritage Youth Ambassadors will be selected by July 31. Successful Ambassadors will participate in orientation training and be assigned specific monuments by TCCH. They will also work together with the Committee in engaging young people in community events across Cyprus.

Details on the Youth Ambassadors Programme were announced Thursday evening at an event at the Home for Cooperation by Ledra Palace.

Kjartan Bjornsson, the Head of Unit for Cyprus Settlement Support at the European Commission said that culture can be a battlefield and it has been in Europe for centuries, however, he added culture can also be the place where people meet and make the most from diversity. Cultural heritage, he added, can strengthen diplomatic relations and mutual understanding and can foster economic growth.

Bjornsson pointed out that Cyprus has a diverse culture and history and called on young people to play an important role and communicate this diverse past to their peers. “Many challenges are ahead of you , some are immense, but so should be your motivation to be agents for positive change”, he told the youngsters.

Takis Hadjidemetriou , the Greek Cypriot representative at the TCCH said that the monuments of Cyprus belong to the young, they are theirs, their history and culture and a common culture and civilisation for all Cypriots. He said that the Committee wants to engage the young and will assign to them various sites that they will have to know and make them theirs and part of their lives.

Hadjidemetriou added that the older generations are responsible for a great many of the problems that the youth is facing today, the divided homeland and the boundaries. “We, however, are able to provide you with a starting point, our monuments and our culture, which know no boundaries and divisions. There you will meet again, Greek Cypriots and Turkish Cypriots young people in a shared effort for a shared cultural heritage”, he pointed out.

In his speech, Ali Tuncay, the Turkish Cypriot representative at the Committee said that cultural heritage on the island is not just stones and mortar, but part of our identity, adding that our fathers and grandfathers spent their lives under conflict and war and that both communities mutually blamed each other for the destruction of this heritage.

“Cultural heritage and differences should no longer be factors that cause conflicts but factors that contribute to cooperation, peace and prosperous living of all”, he said. Tuncay also added that the more we cooperate, the more success stories will come emerge.

Head of UNDP in Cyprus Tiziana Zennaro said in her welcoming speech that the way the young people are engaged today, will determine the prospects for sustainable development for the future and this is why the youth should get involved and be empowered. She pointed out that cultural heritage is about the future as well and that the youth have a shared responsibility to look after and preserve the wealth so it can be enjoyed by future generations.

“As the future custodians of cultural heritage the young people have a particularly important role to play. Together with the Committee and the EU we have designed this initiative in a way that enables us to listen to you”, she said.

Zenarro also said that since 2008, 33 heritage sites, including Orthodox, Maronite and Armenian Churches, mosques and minarets, hamams, aqueducts and watermills have been conserved, supported , protected or restored.
(Cyprus News Agency)