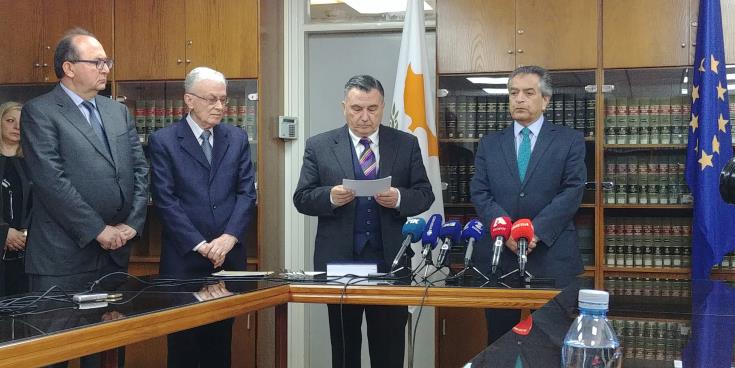 A Committee of Inquiry appointed to look into the collapse of Cyprus’ cooperative credit system has handed over its 800 page report to Attorney General Costas Clerides.

Speaking during the handover Clerides pledged that the Committee’s findings will not be shelved or forgotten but studied thoroughly.

“The report will not be placed away on shelf or in a drawer but rather it will be studied thoroughly and made the most off in order to answer questions on the reasons for the collapse of the cooperative movement, to reach conclusions and finally to ascribe responsibilities of any kind, whether they may be political, disciplinary or criminal,” Clerides stressed.

On his part, the Committee’s President Georgios Aresti said that the report finds that there is room for further investigation of the possibility of the commission of both civil liabilities and criminal offences, while also finding that there is political accountability both before and after 2013.

He also said that the Committee had decided to leave it up to the Attorney General to determine when to publish the report.

Aresti further pointed out that the Committee’s findings are unanimous and cover two different periods between 1985 and 2013 and 2013 and 2018, the first period spanning 9 chapters and the second 28.

Without overlooking the objective difficulties and external factors which throughout the years contributed to creating problems for the cooperative sector, Aresti noted, “the first reason of its downfall was the human factor, and in particular negligence, incompetence but worst of all impudence and greed of many people who were called on the serve the Cooperative sector.”

The three-member inquiry committee which looked into all the facts surrounding and leading to the demise of Cyprus’ cooperative credit system, was sworn in in July 2018.

Economist, former Senior General Manager of Bank of Cyprus and former President of the Cyprus Securities and Exchange Commission Georgios Charalambous as well as former Managing Director and Board of Directors Executive Member of Alpha Bank Cyprus who has also served as former President of the Association of Cyprus Banks and the Banks Employment Association Georgios Georgiou served as the other two members of the Committee.

Until mid-December 2018, the Committee heard evidence from 75 witnesses and received 98 depositions, which took place in 40 public hearings. The minutes of the hearings came to 2,781 pages, while documents numbering 120,000 pages were submitted to the Committee in hard copy or electronic form.

By In Cyprus
Previous article80 children victims of online bullying and blackmail in 2018
Next articleMeeting of FMs of Cyprus, Greece, Egypt and France on the cards