CMP signs Memoranda of Understanding with two US Federal Agencies 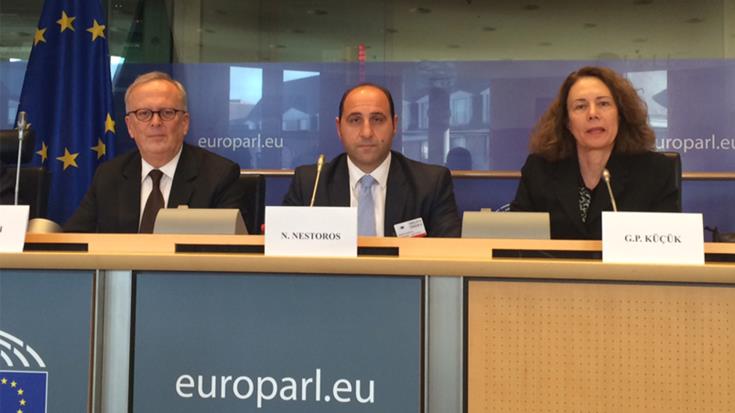 The Committee on Missing Persons in Cyprus (CMP) has signed two Memoranda of Understanding with US Federal Agencies, the Laboratory division of the Federal Bureau of Investigation (FBI)  and the US Defense POW/MIA Accounting Agency (DPAA), which is the US government’s Agency responsible for locating, recovering, and identifying the remains of unaccounted-for Department of Defense personnel from past conflicts.

According to a CMP press release, discussions held between CMP Members and executives of the FBI Laboratory division and DPAA in Washington in May 2018 led to an understanding that cooperation with these two Agencies would help reinforce CMP’s operational capabilities in several fields, including the provision of training in investigative techniques as well as the exchange of scientific practices and services in the fields of forensic anthropology and human identification.

CMP underlined that the signing of these two MoUs shows that CMP is highly respected internationally.

The press release said that the MoU between the CMP and the FBI establishes a framework for cooperation and coordination between the FBI and CMP laboratories, with a specific reference to scientific operations in the framework of human identification as well as the provision of training in this field. Both the FBI and CMP laboratories intend to identify and share capabilities, facilities, technologies, and resources to support the provision of research services, field services, technical analyses, and consultations as well as the sharing of samples and data.

The MoU between CMP and DPAA foresees that the two entities will identify areas of cooperation, in particular with regards to the identification of damaged human remains and other areas requiring advanced technologies. Among these specific areas of cooperation will be the subject of ad hoc Project Partnership Agreements. As it is noted, DPAA’s mission involves, historical research, archaeology, underwater archaeology and laboratory analyses.
(Cyprus News Agency)

By In Cyprus
Previous article€36,500 in fines for undeclared work in Larnaca
Next articleTwo fined €2,650 for 50 cartons of duty free cigarettes